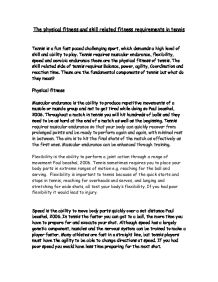 The physical fitness and skill related fitness requirements in tennis

Tennis is a fun fast paced challenging sport, which demands a high level of skill and ability to play. Tennis requires muscular endurance, flexibility, speed and aerobic endurance these are the physical fitness of tennis. The skill related side of tennis requires Balance, power, agility, Coordination and reaction time. These are the fundamental components of tennis but what do they mean?

Muscular endurance is the ability to produce repetitive movements of a muscle or muscle group and not to get tired while doing so Paul beashel, 2006. Throughout a match in tennis you will hit hundreds of balls and they need to be as hard at the end of a match as well as the beginning. Tennis requires muscular endurance so that your body can quickly recover from prolonged points and be ready to perform again and again, with minimal rest in between. The aim is to hit the final shots of the match as effectively as the first ones. Muscular endurance can be enhanced through training.

Flexibility is the ability to perform a joint action through a range of movement Paul beashel, 2006. Tennis sometimes requires you to place your body parts in extreme ranges of motion e.g. reaching for the ball and serving.  Flexibility is important to tennis because of the quick starts and stops in tennis, reaching for overheads and serves, and lunging and stretching for wide shots, all test your body’s flexibility. If you had poor flexibility it would lead to injury.

Speed is the ability to move body parts quickly over a set distance Paul beashel, 2006. In tennis the faster you can get to a ball, the more time you have to prepare for and execute your shot. Although speed has a largely genetic component, muscles and the nervous system can be trained to make a player faster. Many athletes are fast in a straight line, but tennis players must have the agility to be able to change directions at speed. If you had poor speed you would have less time preparing for the next shot.

Aerobic endurance is the ability to continue exercising for a long period of time. To do this the body needs to transport and use the oxygen that is breathed in during exercise Paul beashel, 2006. Aerobic endurance is an important to tennis because during a tennis match you have 25 seconds of rest between points and 90 seconds at changeovers. It will be difficult to recover throughout a match if your aerobic fitness is poor you will be fatigue by the end of a match. Basically The more endurance you have the longer you can keep going, the more ground you cover across the court during the course of a match, the less likely you are to lose concentration, and the less mistakes you will make.

Balance is the ability to maintain the centre of gravity through a range of movement Paul beashel, 2006. Good balance in tennis equals to a powerful game. If you are able to maintain a straight posture, no shot would throw you off balance. Balance is one of the most important parts of playing tennis. Balance aids in proper shot execution, it keeps players from tripping, falling, and possibly getting injured.

Power is the ability to produce a large amount of force in a short period of time Paul beashel, 2006. Modern tennis players require explosive movements and greater power allows you to respond more quickly as well as produce far greater forces when hitting the ball. Power is more important for tennis than strength. Power is what generates speed to the ball. The faster you can overcome the resistance of your arm and racket during the serve, the more power you will be able to generate. Increase in strength and speed will have a positive affect on power.

Agility is the ability to change the body’s position in a short length of time Paul beashel, 2006. A tennis player has to change direction to be able to hit the ball this will give them time for there next shot. This is very important for the tennis player. Increases in strength and power will have a positive affect on the agility of a player. Changing direction quickly requires great amounts of strength and power, and muscular endurance can help to change direction again and again without excessive fatigue.

Coordination is the ability to synchronize movement of the arms and legs while the body is in motion Paul beashel, 2006. A good example of coordination in tennis is when the tennis player is running to hit the ball while aiming where to place the ball in the opposing half. When a tennis ball flies toward you, your eyes sends information about it to the brain, which calculates its distance, speed. Then the brain sends command signals to the muscles in your arm, telling it where to move the racquet in order to meet the ball.

Reaction time is the time taken to react to a stimulus Paul beashel, 2006. In tennis an average serve is 109mph and you will have little time to react so good reaction time would help. Excellent reaction time helps a player return a serve, a smash, play effectively at the net or simply return the ball into the opponent's court. Poor reaction time will lose you points.

The physical fitness and skill related fitness requirements in football

Muscular endurance is the ability of the muscle to work for long periods of time without tiring. In football a good example of this is repeated running and kicking in a game. Football requires muscular endurance so that your body can repair from running up and down the pitch. Muscular endurance can be enhanced by exercise and training.

Flexibility is the ability to perform a joint action through a range of movement. Flexibility is critical in football because of the joint stress associated with dynamic multi-joint movements, this can lead to injury. By being flexible you are less likely to cause injury.

Speed is the ability to perform a movement or cover a distance in a short period of time. Speed is an essential element of successful footballer they will be able to accelerate, change direction quickly and deceive the opposition. By having good speed you will be able to make runs and opportunities on the pitch.

Body composition is looking at the amount of body fat mass around the body it is important to sport but also health and well being. Football you will need to move freely around the pitch without excess weight but in football it is a contact sport so footballers will need to be strong on the ball so they will be mesomorph. It is a well-known fact backed up by scientific evidence   that carrying a few extra pounds can affect your performance. It can lead to fatigue, increased injury risk and a decreased adherence to training.

Balance is the ability of the performer to retain their centre of mass over their base of support. In football balance is needed to avoid getting knocked off the ball when you are dribbling and the opponent is shoulder barging you. Balance is also important because you will need good balance to make an accurate shot. Balance is important in football so you can make accurate shots.

Power is a combination of strength and speed. In football power is used to shoot when you take your leg back and following through.

Agility is the ability of the performer to change the position of their body quickly, whilst keeping their entire body under control. . Agility is important because football doesn't require players to run in straight lines. They need to be able to change direction without losing speed.

Coordination is the ability of the performer to move two or more body parts accurately. Coordination in football is when you run and give accurate passes.

Reaction time is the amount of time it takes for a performer to initiate movement after the presentation of a stimulus. In football a goalie has hardly any time to react to a penalty so he would need good reaction time.

The physical fitness and skill related fitness requirements in basketball

Flexibility is the ability to move in a full range of motion. In basketball it will give you an advantage to reach higher toward the basket and increase your stride.

Speed is the ability to perform a movement within a short period of time. In basketball speed will help you deceive the opposition by changing direction fast.

Aerobic endurance is the ability to utilize oxygen efficiently, over an extended period of time. In basketball the players are expected to repeat multiple high-intensity activities with minimal rest periods. With poor aerobic endurance the basketball players won’t be able to last as long.

Body composition, the percentage of body weight which is fat, muscle and bone. In basketball it is a non contact sport so they are more suited to ectomorph.

Balance is the ability to maintain equilibrium while stationary or moving. One important thing in basketball is shooting and if your not balanced   you will have a poor shot and be inconsistent.

Power is the amount of force a muscle can exert. In basketball power is used to jump up and reach for the ball or slam dunk.

Agility is the ability to rapidly and accurately change the direction of the whole body in space. Agility is used in basketball when trying to deceive the opponent.

Coordination is the ability to use the senses and body parts in order to perform motor tasks smoothly and accurately.   To get an accurate shot in basketball you will need to have good coordination.

Reaction time, the speed to response to stimuli. A good example of reaction in basketball the players would need to react to the ball and the opponent’s movement.