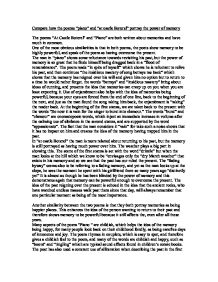 Compare how the poems "piano" and "at castle Boterel" portray the power of memory The poems "At Castle Boterel" and "Piano" are both written about memories and have much in common. One of the most obvious similarities is that in both poems, the poets show memory to be highly powerful, and speak of the poem as having overcome the present. The man in "piano" shows some reluctance towards revisiting his past, but the power of memory is so great that he finds himself being dragged back in a "flood of remembrance". The poem reads "in spite of myself" which shows he is reluctant to relive his past, and then continues "the insidious mastery of song betrays me back" which shows that the memory has reigned over his will and given him no option but to return to a time he would rather forget. the words "betrays" and "insidious mastery" bring about ideas of cunning, and presents the idea that memories can creep up on you when you are least expecting it. Use of enjambment also helps with the idea of memories being powerful, because your eyes are forced from the end of one line, back to the beginning of the next, and just as the man found the song taking him back, the enjambment is "taking" the reader back. At the beginning of the first stanza, we are taken back to the present with the words "So now it is vain for the singer to burst into clamour." ...read more.

The fact that the man weeps to "belong" to his past suggests that he is currently insecure, and this supports the idea of the past being a more desirable place to be. In the poem "At castle Boterel" the poet Hardy has used contrast to show how much better the past was in comparison to the present. The scene is set in the first stanza with the word "drizzle" and we are able to understand immediately that the weather is miserable. As soon as the man begins to reminisce on his past, we are told "dry March weather" and so from the start the past is seen as a more desirable place. Another contrast between the beauty of the past ad lack of excitement in the present is made through the mention of transport. In the present, we are told that the man rides on a waggonette, which is symbolic of his insignificant, rather tired life in the present. Hen the talks of his past, we are told that the happy couple rode on a chaise. A chaise is a grand carriage and this is symbolic of the richness of life then, compared to now, and is just one way the poet has shown the past to be more idyllic than the present. The poet has used the rhetorical question "was there ever a time of such quality since or before in that hill's story" to persuade the reader into excepting that the man' memory was a most perfect moment. ...read more.

Throughout the majority of the poem " at Castle Boterel" the reader is taken into the man's beautiful past. In the last stanza, however, we are dragged abruptly back into his miserable present and reminded once again that it is raining. The weather here acts as a barrier, which separates the man from his past, for we know that in the past the weather was fine and dry. This creates a feeling of helplessness, for we know how much this man longs to be back in his past, and yet there is no way he can return, because the moment has been and gone, there is also a sense that time is running out and that the man finds his memory slowly escaping from his grasp. Repetition is used in the words "shrinking shrinking" to add emphasis and show that the memory is gradually fading. The strong image of the egg timer counting down what little time he has left, coupled with the phrase "for the very last time", adds a not of helpless and uncontrollable finality to the poem. At the end of each stanza is one short, simple phrase, which sticks out on a line by itself and is therefore subject to much emphasis. In the final stanza, this is the words "never again" which finishes the poem on a sad, butter note and gives to the whole poem a sense of regret, helplessness and finality. ...read more.