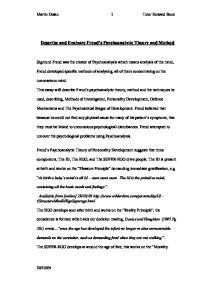 Describe and Evaluate Freud's Psychoanalytic Theory and Method Sigmund Freud was the creator of Psychoanalysis which means analysis of the mind, Freud developed specific methods of analysing, all of them concentrating on the unconscious mind. This essay will describe Freud's psychoanalytic theory, method and the techniques he used, describing, Methods of Investigation, Personality Development, Defence Mechanisms and The Psychosexual Stages of Development. Freud believed that because he could not find any physical cause for many of his patient's symptoms, that they must be linked to unconscious psychological disturbances. Freud attempted to uncover the psychological problems using Psychoanalysis. Freud's Psychoanalytic Theory of Personality Development suggests that three components, The ID, The EGO, and The SUPER-EGO drive people. The ID is present at birth and works on the "Pleasure Principle" demanding immediate gratification, e.g. "At birth a baby's mind is all Id - want want want. The Id is the primitive mind, containing all the basic needs and feelings". . Available from [online] 19/10/04 http://www.wilderdom.com/personality/L8-4StructureMindIdEgoSuperego.html The EGO develops soon after birth and works on the "Reality Principle", the conscience is formed which aids our decision making, Davies and Houghton (1995 Pg 261) ...read more.

In the Anal Stage the child's anus becomes the focus of stimulation and pleasure is derived from expelling faeces, however at this age the Ego is developing so the child is becoming aware of the demands of reality and potty training is a major issue. From the age of three the child enters the Phallic Stage, the penis and clitoris become the main areas of interest for stimulation and according to Freud the child becomes attracted to the parent of the opposite sex and dismisses the parent of the same sex, this is referred to as the Oedipus Complex in boys and the Electra Complex in girls. Once the child reaches the age of six years onwards into puberty the child resolves these conflicts whilst he or she is in the Latency Stage, described by Freud as the stage in which social and intellectual development proceeds and gender identity is consolidated. The final Psychosexual Stage is the Genital Stage; this is the beginning of mature adult sexuality. Our behaviour is always driven by Sex or Aggression according to Freud; these were the two elements that he based his Psychoanalytic approach on. ...read more.

Most of Freud's conclusions were sexual in nature e.g. Objects dreamt about such as Swords, Guns, Snakes etc suggested penetration symbolising the penis, where as Purses, Boxes, Caves etc symbolised the vagina. Freud's theories have and still do receive criticism, Davies and Houghton (1995 Pg 267) describe Freud as..." inconsistent about some aspects of his theories, such as the Electra Complex on female development" "Freud did not use scientific methods even though he had been trained in these methods early in his career" Most critics believe he placed far too much emphasis on sexuality, and his patients were described as unrepresentative, being mainly Venetian women with abnormal behaviours, upper-class and single. Case studies according to Davies and Houghton (1995 Pg 267) were..."retrospective, (that is based on what he could remember) as he did not take notes, believing this would interfere with the concentration of both the patient and himself". Freud's theories did however contribute to show that childhood events and abuse can affect adult personality, and allowed us to realise that deep within our unconscious lays the true reasons for our behaviour. Though the debate as to the reliability of the Psychoanalytic concept as a whole will continue to rage, it also will continue to produce a valuable insight into the area of human behaviour and motivation. ...read more.

This is quite a difficult topic to cover since Freud's work is enormous. The writer has covered some of the main aspects of his psychoanalytic work and methods, but this essay could be improved if the writer used their own words throughout. This confirms that the writer understands the work fully. The writer needs to structure the essay better by writing a plan which includes an introduction, a list of content that is going to be covered and a conclusion.