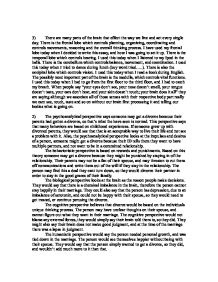 The behavioristic perspective is based on rewards and punishments. Based on this theory someone may get a divorce because they might be punished by staying in of the relationship. Their parents may not be a fan of their spouse, and may threaten to cut them off communications and write them out of the will if they stay in the relationship. The person may find this a deal they cant turn down, so they would divorce their partner in order to stay in the good graces of their family. The biological perspective looks at the brain as the reason people make decisions. They would say that there is a chemical imbalance in the brain, therefore the person cannot stay happily in their marriage. They could also say that the person has depression, due to an imbalance of serotonin, and could not be happy with their spouse, so they would need to get treated, or continue perusing the divorce. ...read more.

They would say they have seen so many of their peers getting divorced, it seems normal. So they might not work to work out their problems, they just get a divorce because that's what over half of America is doing. Eclecticism is an approach that uses more than one theory to explain how or why something happens. This idea would be beneficial to describing human behavior because there are many contributing factors in peoples decision making. They might do something for multiple reasons, using divorce as an example, a person might have grown up in a divorced home, but they also might have a cheating spouse, and a chemical imbalance in the brain. Their reason for divorce can't simply be explained by the psychoanalytic, behavioristic, or biological perspective. But when you use all of the perspectives together you can get a clear understanding of why they got a divorce. Human behavior cannot be explained with only one perspective because there are many contributing factors to the decisions people make. ...read more.

There are some good points made in this work regarding reasons for divorce from various theoretical perspectives. The main area for improvement is around the use of key terminology from the theory being discussed. For instance in the work regarding humanistic theory, the idea of self-actualisation was discussed but the terminology wasn't used.
Demonstrate your clear understanding of the subject matter by using the correct terms. I noted that the answers are not numbered in order, and it was not clear how the first response linked to the work later about divorce. Please make the link clear. The writing style was good overall.
3/5