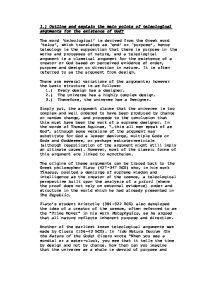 The word ‘teleological’ is derived from the Greek word ‘telos’, which translates as ‘end’ or ‘purpose’, hence teleology is the supposition that there is purpose in the works and processes of nature, and a teleological argument is a classical argument for the existence of a creator or God based on perceived evidence of order, purpose and design or direction in nature. It is often referred to as the argument from design.

There are several variations of the arguments; however the basic structure is as follows:

Simply put, the argument claims that the universe is too complex and well ordered to have been produced by chance or random change, and proceeds to the conclusion that this must have been the work of a supreme designer. In the words of Thomas Aquinas, “…this all men speak of as God”, although some versions of the argument may substitute for God a lesser demiurge, multiple Gods or Gods and Goddesses, or perhaps extraterrestrials (although reapplication of the argument might still imply an ultimate cause). However, most of the classic forms of this argument are linked to monotheism.

The origins of these arguments can be traced back to the Greek philosopher Plato (427-347 BCE) who, in his work Timaeus, posited a demiurge of supreme wisdom and intelligence as the creator of the cosmos, a teleological perspective built upon the analysis of a priori [where the proof does not rely on external evidence] order and structure in the world which he had already presented in The Republic.

Plato’s student Aristotle (384-322 BCE) also developed the idea of a creator of the cosmos, often referred to as the “Prime Mover” in his work Metaphysics, as he argued that all nature reflects inherent purpose and direction.

Another of the earliest known teleological arguments was made by Cicero (106-43 BCE). In ‘ide Natura Deorum (On the Nature of the Gods) Cicero wrote “When you see a sundial or a water-clock, you see that it tells the time by design and not by chance. How then can you imagine that the universe as a whole is devoid of purpose and intelligence, when it embraces everything, including these artefacts themselves and their artificers?”

The most notable scholastics (circa 1100-1500 CE) who put forth teleological arguments were Averroes (Ibn-Rushd) (1126-1198) and Thomas Aquinas (1225 – 1274). Writing from an Islamic perspective in the latter half of the 12th Century, Averroes’ teleological arguments can be characterized as primarily Aristotlean and presuming one God. He argues based mainly upon Aristotle’s Physics, in essence that the combination of order and continual motion in the universe cannot be accidental, and requires a Prime Mover, which is in itself pure intelligence.

This set the stage for Aquinas in the 13th Century, who was much more thoroughly Aristotlean and a posteriori [where the proof of the statement relies on external evidence] than his predecessors. Aquinas makes a specific, compact version of the teleological argument in his Summa Theologiae, the fifth of his five proofs for the existence for God; “…whatever lacks knowledge cannot move towards an end, unless it be directed by some being endowed with knowledge and intelligence; as the arrow is directed by the archer. Therefore, some intelligent being exists by whom all natural things are directed to their end; and this being we call God.

Continuing the argument of Socrates, Plato and Aquinas, in his book Natural Theology, William Paley (1743-1805) presented his renowned argument from simple analogy, commonly referred to as Paley’s watch argument. Paley’s analogy of the watch conveys the essence of the argument. He claimed that if someone were to discover a beautifully complex watch on the ground they would not think it had happened there by chance, and would expect it to have an intelligent designer, and he applies the same way of thinking towards the universe. As the universe is vastly more complex than a watch however, it follows that the designer would be, in turn, vastly more intelligent.

F.R. Tennant (1866-1957) argued that although it is possible to imagine a chaotic universe without rules, our universe is obviously ordered, and seems to be designed in order to benefit and promote life, working to support the advancement of species. Tennant is associated with the aesthetic argument, where he argues that humans do not merely strive to survive, an instinct we may have developed through natural selection, rather we appreciate aesthetic activity such as music and literature, which must, he claims, denote a designing creator.

Richard Swinburne (1934-present) agrees with Tennant that the universe could easily be either ordered or chaotic, but he goes on to argue that the fact that it appears ordered cannot be mere chance and that it must therefore be a matter of probabilities.

2.) In what ways can these arguments be criticised? How far may they still be considered to be strong arguments?

In his Dialogues on Natural Religion, David Hume (1711-1776) makes several criticisms of the Design Argument. One of these criticisms is his observation that the strength of an inductive inference is influenced by the sample size, that certainty is based on how many times something has happened and how probable it is to reoccur. Hume claims that if we are to have a reason for thinking that the universe is a product of intelligent design, we would have to base this conclusion on inductive reasoning, and would therefore have to examine a large number of other universes to inductively infer that most or all of them are the result of intelligent design. However in the Design Argument, our sample size reaches one, as only the current universe that we inhabit is available for inspection.

Another challenge to the Design Argument is the theory of evolution. Although not the first to propose the theory, Charles Darwin (1809-1882) first put forward a comprehensive theoretical explanation for it in his “The Origin of Species” (1858). He proposed that similarities between species could be explained through a common heredity, that they both shared a common ancestor, and argued for adaptation through natural selection or survival of the fittest. The consequences Darwin’s arguments have for the teleological argument is;

In conclusion, the teleological argument is not definite and conclusive argument for the existence of God. To state that there is order and purpose in the universe seems to be accurate as there is an abundance of evidence to prove so, for example, the way trees harmonise with animals with the release of carbon dioxide and oxygen. However, this evidence of purpose and order does not necessarily mean that an intelligent being was the cause of it.

It could have happened by what is outlined as the “Big Bang” theory, and certainly the scientific evidence for this is visible. Another factor that counters the notion of an intelligent designer is the countless experiences of disorder, such as natural disasters, as it is difficult to reason why an intelligent being would create a world which has order for there to be so much disorder.

Yet, the success of the Teleological argument rests upon individual judgement. If a person chooses to believe that the universe is a product of blind chance then the Argument will not prove successful, but if the idea of the universe simply existing as brute fact is personally unsatisfactory due to it’s extraordinary nature, whilst the Teleological argument may not conclusively prove the existence of God, it suggests that the existence of a Designer, who we know as God, is a more probable likelihood than not.

The topic remains highly controversial as the argument cannot fully grant us a link between the observed world and a God beyond. It is a posteori, formulated by unfounded conclusions from analogies of empirical observation and who is there to say that they have had enough world experience and knowledge to make these conjectures.