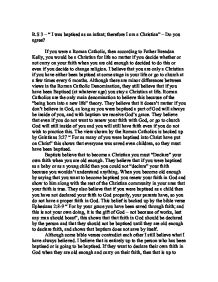 R.S 3 - " I was baptised as an infant; therefore I am a Christian" - Do you agree? If you were a Roman Catholic, then according to Father Brendan Kelly, you would be a Christian for life no matter if you decide whether or not carry on your faith when you are old enough to decided to do this or even if you decide to change religion. I believe that you are only a Christian if you have either been baptised at some stage in your life or go to church at a few times every 6 months. Although there are minor differences between views in the Roman Catholic Denomination, they still believe that if you have been Baptised (at whatever age) ...read more.

Baptists believe that to become a Christian you must "Declare" your own faith when you are old enough. They believe that if you were baptised as a baby or as a young child then you could not "declare" your faith because you wouldn't understand anything. When you become old enough by saying that you want to become baptised you renew your faith in God and show to him along with the rest of the Christian community in your area that your faith is true. They also believe that if you were baptised as a child then you have not declared your faith to God properly, your parents have, so you do not have a proper faith in God. ...read more.