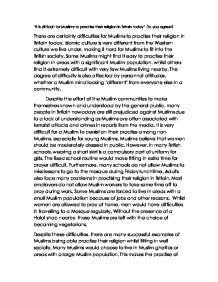 It is difficult for Muslims to practise their religion in Britain today Do you agree?

The fixed school routine would make fitting in extra time for prayer difficult. Furthermore, many schools do not allow Muslims to miss lessons to go to the mosque during Friday lunchtime. Adults also face many problems in practising their religion in Britain. Most employers do not allow Muslim workers to take some time off to pray during work. Some Muslims are forced to live in areas with a small Muslim population because of jobs and other reasons. Whilst women are allowed to pray at home, men would have difficulties in travelling to a Mosque regularly. Without the presence of a Halal shop nearby, these Muslims are left with the choice of becoming vegetarians. ...read more.

Nowadays, there is at least one Mosque in most cities. With the increasing Muslim population in Britain, more Halal butchers, Muslim schools and Mosques are opening around Britain. This makes it a lot easier for Muslims to live their lives according to their religion. Also, the Islamic practises would be more accepted among society as the increasing Muslim population raised the awareness of the general public. Women in hijabs would be more common and accepted. Employers would be more sympathetic as Muslim workers take up a larger percentage of their workforce. Fit in - problem is - at what cost? As the evidence above shows, it is certainly entirely possible for a Muslim to successfully fit into the British community while maintaining their religious obligations. Whilst the difficulties are not to be undermined, it is possible to overcome them. ...read more.