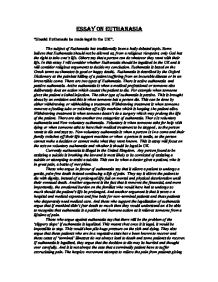 Should Euthanasia be made legal in the UK.

Essay on euthanasia "Should Euthanasia be made legal in the UK". The subject of Euthanasia has traditionally been a hotly debated topic. Some believe that Euthanasia should not be allowed as, from a religious viewpoint, only God has the right to take one's life. Others say that a person can do whatever they want with their life. In this essay I will consider whether Euthanasia should be legalised in the UK and it will consider religious arguments to decide my conclusion. Euthanasia is based on the Greek terms eu-thanatos (a good or happy death). Euthanasia is described by the Oxford Dictionary as the painless killing of a patient suffering from an incurable disease or in an irreversible coma. There are two types of Euthanasia. There is active euthanasia and passive euthanasia. Active euthanasia is when a medical professional or someone else deliberately does an action which causes the patient to die. For example when someone gives the patient a lethal injection. The other type of euthanasia is passive. This is brought about by an omission and this is when someone lets a person die. This can be done by either withdrawing or withholding a treatment. Withdrawing treatment is when someone removes a feeding tube or switches off a life machine which is keeping the patient alive. ...read more.

Many feel that it is not a priority for medical professionals, who they claim disregard it as a less glamorous opportunity. Christianity's view on Euthanasia is mostly against Euthanasia. Christianity states that life is a gift from God and only God had the right to end a human's life. Birth and death is considered as part of life's process and which God has ordained and so we should we respect them. Churches say that Euthanasia should not be committed because it means humans are interfering with the natural process of death. Christianity also states that God created humans in his image i.e. the ability to decipher between right and wrong and so as people develop this ability they live a life close to God's love. This means the aim of life is to strive towards achieving God's love and kindness. No one can stop someone from their aim and life must be preserved so a person can achieve the aim of life. Another argument put forward is that to suggest euthanasia is propose that the patient's life is worthless and this is not the case in the eyes of god. And if a patient is in a vegetative state this does not mean their life is worthless as every human's life is valued the same in the eyes of God. ...read more.

Both Euthanasia and suicide are explicitly forbidden in Islam due to the fact that Muslims believe that Allah is omnipotent. This is means he has the ability to do anything. If Allah wishes then he could cure the patient in an instant and relieve his pain. And so Islam on the basis of this forbids any act of Euthanasia and suicide. By default my conclusion is that Euthanasia should not be legalised in the UK due to the fact that I am a Muslim. But by taking all the arguments into account it is rational that a person should if they are in unbearable pain, only then should they be allowed to kill themselves as they would rather die with dignity and die a painless death. However I think that if Euthanasia was legalised then it would cause people to hurry their decisions over life or death and it would become impossible to stop. Although it does seem rational the fact of the matter is that it isn't possible as it would become an on-demand thing where people who are in little pain just decide to kill themselves. So although it is a rational argument it isn't possible or conceivable to legalise it in the UK. ...read more.