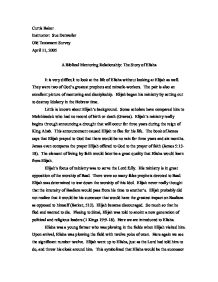 A Biblical Mentoring Relationship: The Story of Elisha

Curtis Baker Instructor: Sue Detweiler Old Testament Survey April 11, 2005 A Biblical Mentoring Relationship: The Story of Elisha It is very difficult to look at the life of Elisha without looking at Elijah as well. They were two of God's greatest prophets and miracle-workers. The pair is also an excellent picture of mentoring and discipleship. Elijah began his ministry by setting out to destroy Idolatry in the Hebrew time. Little is known about Elijah's background. Some scholars have compared him to Melchizedek who had no record of birth or death (Graves). Elijah's ministry really begins through announcing a drought that will occur for three years during the reign of King Ahab. This announcement caused Elijah to flee for his life. The book of James says that Elijah prayed to God that there would be no rain for three years and six months. James even compares the prayer Elijah offered to God to the prayer of faith (James 5:13-18). The element of living by faith would later be a great quality that Elisha would learn from Elijah. Elijah's focus of ministry was to serve the Lord fully. His ministry is in great opposition of the worship of Baal. There were so many false prophets devoted to Baal. Elijah was determined to tear down the worship of this Idol. ...read more.

Elisha's character is marked by mercy (2 Kings 2:2), disinterestedness (2 Kings 5), and toleration (5:19). He walked with authority to all sects of people (Lockyer, 106). Numerous stories grew out of Elisha's ministry. His ministry would be a ministry of life. He would restore a young boy who had died (2 Kings 4:8-37). He would save many lives by purifying a pot of soup or stew that was poisonous (4:28-44). He would help a poor widow (4:1-7). He was a man of mercy, compassion, and of power (Tullock. 194). He would also follow in the political footsteps of his mentor. Elisha confronted the kings who turned away from the Lord. He played a key part in several Israelite victories. He was even instrumental in the overthrow of a king. Elisha never shunned away form the responsibilities given to him by God and passed on through Elijah (Engle). He took his call very seriously and faithfully. Through this act of obedience to God, He blessed his ministry a double portion as well. Elisha was not a man of pride at all. We see that the Lord did bless him in his ministry of life as he performed twice as many miracles as did his mentor Elijah. Elijah performed eight miracles while Elisha performed sixteen (Konig). ...read more.

The fruit, however, did not fully begin to grow until I was submitted to him. I had to trust that the path Jeff is currently walking is one of wisdom, authority, proper alignment, and love. Just as Elisha fully trusted Elijah, I have grown a deeper level of trust and of submission to Jeff. When Elisha decided to burn his plowing equipment and follow Elijah, it reminded of how I was told to fully lay it ALL down. Luke 9:62 states "Anyone who puts a hand to the plow and then looks back is not fit for the Kingdom of God (NLV)." That is what Elisha did. He, not only never looked back, but he burned the tools that would allow him to look back. He pressed into Elijah and found strength, power, character building and much more. Just as Elisha pressed in, I too am pressing into my mentor. This example is perfect of proper alignment. Not only with those above you, but importantly how it affects those you have poured into. Even just reading the characteristics of the two pointed out by Lockyer, it is humorous to see the characteristics of Jeff and me. Being fully submitted and walking in the light will bring blessing, power and a greater understanding of the authority of Christ in one's life. A lesson we are often wanting to gain, but not willing to get through the steps necessary to get there. ...read more.