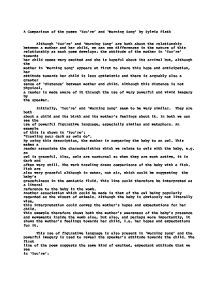 A Comparison of the poems 'You're' and 'Morning Song' by Sylvia Plath Although 'You're' and 'Morning Song' are both about the relationship between a mother and her child, we can see differences in the nature of this relationship as each poem develops: the attitude of the mother in 'You're' towards her child seems very excited and she is hopeful about its arrival but, although the mother in 'Morning Song' appears at first to share this hope and anticipation, her attitude towards her child is less optimistic and there is arguably also a greater sense of 'distance' between mother and child. Although this distance is not physical, a reader is made aware of it through the use of very powerful and vivid imagery by the speaker. Initially, 'You're' and 'Morning Song' seem to be very similar. They are both about a child and its birth and its mother's feelings about it. In both we can see the use of powerful figurative language, especially similes and metaphors. An example of this is shown in 'You're': "Trawling your dark as owls do". By using this description, the mother is comparing the baby to an owl. This makes a reader associate the characteristics which we relate to owls with the baby, e.g. an owl is graceful. Also, owls are nocturnal so when they are most active, it is dark and often very still. The verb trawling draws comparisons of the baby with a fish. ...read more.

For example, the fact that the birth is being 'magnified' implies the importance of the baby's birth for the mother. 'New statue' emphasises this importance as statues are often attractive to look at and commemorates someone famous or of particular importance. This reveals how the mother perceives her baby and her hopes and expectations that it too will become famous and important. This fits in with the optimistic mood created in 'You're' and the first stanza of 'Morning Song'. However, when considered literally, the images become more bleak and almost pessimistic. For example, although the image 'New statue' initially seemed to be following the optimistic mood set in 'Morning Song', when analysed more closely, this would not appear to be the case. You would generally find that statues are built in memory of someone famous who has died. Statues are cold, made of stone and therefore lifeless. They commemorate something which is dead and gone. This could arguably suggest an idea of death, not necessarily a literal one, but that something has been or is in danger of dying. Another example is the echoing voices which could possibly be a suggestion of emptiness, maybe showing that the speaker feels empty now. There is arguably also a feeling of resentment here because for 9 months, the mother was the person closest (in both the literal and the physical sense) to the baby however, now it is on display for everyone. ...read more.

These lines imply that she always has to tend to her baby's needs when it calls, and that she has no freedom anymore. There is the implication therefore that, to some extent, the baby is controlling her life. This is shown by the fact that although she describes herself as 'cow-heavy', she describes her baby as a 'cat'. By describing herself as 'cow-heavy', the mother could be showing how she feels about her physical appearance and therefore associating the characteristics of a cow with herself. She could arguably also be comparing her appearance to that of her baby and she feels large and clumsy compared to it. It is possible that she is referring to the fact that cows are generally considered quite dumb and domesticated and this is how she feels as she immediately reacts to her child's cries. Contrary to this however, cats are very independent creatures and this could show that the mother feels tied down by her child. These lines also refers to the theme of distance which is presented throughout the poems. 'Cow-heavy' is obviously a metaphorical description as she cannot literally be as heavy as a cow, so if you extend the metaphor, her child would therefore be a calf. However, she describes it as a cat. As cows and cats are obviously completely different species, this could arguably show that she feels she can't relate to her child, creating a feeling of distance between them. An example of this distance can also be found in 'You're': "Feet to the stars, and moon skulled". ...read more.