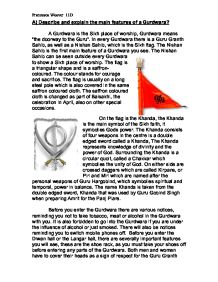 A) Describe and explain the main features of a Gurdwara?

A) Describe and explain the main features of a Gurdwara? A Gurdwara is the Sikh place of worship, Gurdwara means "the doorway to the Guru". In every Gurdwara there is a Guru Granth Sahib, as well as a Nishan Sahib, which is the Sikh flag. The Nishan Sahib is the first main feature of a Gurdwara you see. The Nishan Sahib can be seen outside every Gurdwara to show a Sikh place of worship. The flag is a triangular shape and is a saffron-coloured. The colour stands for courage and sacrifice. The flag is usually on a long steel pole which is also covered in the same saffron coloured cloth. The saffron coloured cloth is changed as part of Baisakhi, the celebration in April, also on other special occasions. On the flag is the Khanda, the Khanda is the main symbol of the Sikh faith, it symbolies Gods power. The Khanda consists of four weapons in the centre is a double edged sword called a Khanda, The Khanda represents knowledge of divinity and the power of God. ...read more.

Only vegetarian meals are served and all the meals are prepared and cooked by volunteer members of the congregation which are called Seva. Seva means the voluntary and selfless service for others. All the voluntary members are equal and share equal responsibility which comes with the maintenance of the Gurdwara, including the Langar. The Langar meal is eaten whilst sitting cross-legged on the floor like the Diwan hall, unlike the Diwan hall men and women are free to sit together, as you do not have to concentrate on God so much. You can have as many meals as you like but it is exceptionally disrespectful to leave any food on your plate. Sharing food is important as the Gurus taught Sikhs that they should share their possessions with others. If the Gurdwara is big enough they would have a Sach Khand which is a rest room for the Guru Granth Sahib. The Guru Granth Sahib is treated as a living Guru. In the evening the Guru Granth Sahib is wrapped in clean Rumalas and respectfully carried to the Sach Khand, in the morning the Guru Granth Sahib is brought back into the Diwan hall. ?? ?? ?? ?? Francesca Weaver 11D ...read more.