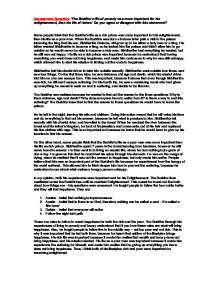 The Buddhas life of poverty was more important for his enlightenment, than his life of riches Do you agree or disagree with this statement?

Assessment Question: 'The Buddha's life of poverty was more important for his enlightenment, than his life of riches' Do you agree or disagree with this statement? Some people think that the Buddha's life as a rich prince was more important for his enlightenment, than his life as a poor man. When the Buddha was born a fortune teller paid a visit to the palace informing the king that his son, Siddhartha Gotama, will grow up to be either a holy man or a king. His father wanted Siddhartha to become a king, so he locked him the palace and didn't allow him to go outside so he would never be able to become a holy man. Siddhartha had everything he wanted, but he still was not happy. His life as a rich prince was important because he understood that having everything you want does not bring happiness, and made him curious as to why he was still unhappy, which allowed him to start his mission in finding out the route to happiness. ...read more.

So he left in the night, leaving his wife and children. Doing this action meant that he will value his time and do everything to find out his answer, because he left what is precious to him. Siddhartha left secretly with his chariot rider, and travelled to the forest. When he reached the river between the forest and his father's kingdom, he took of his jewellery and ornaments; cut of his hair and replaced his fine clothes with rags. This is an important act because he knew that he would have to give up his luxuries to find his answer. On the other hand, some people think that the Buddha's life as a poor man was more important than his life as rich prince. Siddhartha spent 7 years in the forest learning from teachers, however he still never found is answer. He then went in to living an ascetic life, where he had nothing but a grain of rice a day. ...read more.

Dukka - belief that everyone will suffer 4. Follow the eight fold path These are rules to follow to reach happiness for both the rich and the poor. The Buddha through his experiences of living in poverty and luxury understood that if you how these rules are what will bring happiness. Also, he taught people to follow live in the middle way - not too poor and not rich. This is why it was important that he led both lives, because he learnt that neither of the lifestyles brings happiness. His rich life was important because it made him realise that wealth and luxury does not bring happiness, and his mission started. His life as a poor man was important because it made him experience the suffering for himself, and made him realise that by giving up everything you have, does not bring happiness. Thus, I think both of his lifestyles, rich and poor were important for becoming enlightened. ...read more.