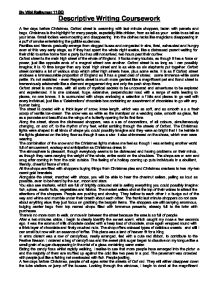 A few days before Christmas, Oxford street is swarming with last minute shoppers, laden with parcels and bags.

By Vibi Rajkumar 11GO Descriptive Writing Coursework A few days before Christmas, Oxford street is swarming with last minute shoppers, laden with parcels and bags. Christmas is the highlight for many people, especially little childen, from as tall as your ankle to as tall as your knee. Small todlers were moaning and disappearing into the clothes racks like magicians disappearing in a puff of smoke entertaining the gullible audiences. Families and friends gradually emerge from clogged buses and congested trains, tired, exhausted and hungry even at this very early stage, as if they had spent the whole night awake, like a distressed parent waiting for their child to arrive home from a party but has still not arrived, two hours past their curfew. Oxford street is the main high street of the whole of England. It flocks many tourists, as though it has a force or power, just like opposite ends of a magnet attract one another. Oxford street is as long as I can possibly imagine; it is 10 time longer than any local high street and is as wide as six elephants put together. Oxford street contains a lot of various shop which other high streets have, plus some extra. ...read more.

The shops are warm and snug after coming in from the cold outside. The feeling of a holiday coming up puts individuals in a ebullient, friendly, cheerful frame of mind. All the shops are filled with shoppers buying things from Christmas pies and Christmas crackers to twenty-two carrot gold bracelets. Alongside the street, marched with shops, you will be able to hear the chestnut sellers, yelling as loud as possible, even to be heard by the sun, moon and stars. You also see markets, which are full of brightly coloured stalls selling everything you could possibly imagine: fish, spices, exotic fruits, vegetables and fabrics. The market sellers shot at the top of their voices to attract the attentions of the shoppers. People are pushing and shoving. They bellow to each other to budge out of the way and whine and mumble under their breath about each other. The frantic last minute shoppers do not care about anything else; they just focus on grabbing the bargain items. The shoppers are still carrying enormous, bulging carrier bags from top named shops filled with immense presents, already full to the brim with purchases. There is no more room to walk, or move in between the street because the area is so full of people. ...read more.

The families' scramble over the wrapping paper and the children throw off their woolly coats, hats, scarf's and gloves due to the intense heat of the store. The heat of the room was rapidly increasing, whereby a point, I could not stand to no longer stay in the store. The smallest child struggles behind the rest falls headlong in the plies of disorganized clothes thrown on the floor. His dignity lost. I stride to the nearest exit gasping for breath. As I walk through 'MK1', I can undoubtedly see that many shoppers were haggling over the price of purchases. Then someone barges into me and I very nearly fall over with the force of it. After I recover from my sudden fall, I widen my horizon and gaze upon particular groups of people. I get attracted to look at the people with loud voices. The brightness of the light decreases as the clouds begin to fasten together together structuring one massive cloud. It began to snow. The cold was beating on me. I felt the cold reaching my body even with wearing a thick layer of wool covered by a fur coat. It was as though I was wrapped with a sheep, which had never had its fur, trimmed. The bitter air smacks my face as I walk, without any energy and worn out, forwards towards the end of the road to relaxation. ...read more.