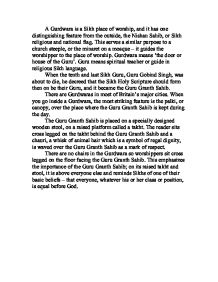 A Gurdwara is a Sikh place of worship.

A Gurdwara is a Sikh place of worship, and it has one distinguishing feature from the outside, the Nishan Sahib, or Sikh religious and national flag. This serves a similar purpose to a church steeple, or the minaret on a mosque - it guides the worshipper to the place of worship. Gurdwara means 'the door or house of the Guru'. Guru means spiritual teacher or guide in religious Sikh language. When the tenth and last Sikh Guru, Guru Gobind Singh, was about to die, he decreed that the Sikh Holy Scripture should form then on be their Guru, and it became the Guru Granth Sahib. There are Gurdwaras in most of Britain's major cities. When you go inside a Gurdwara, the most striking feature is the palki, or canopy, over the place where the Guru Granth Sahib is kept during the day. The Guru Granth Sahib is placed on a specially designed wooden stool, on a raised platform called a takht. The reader sits cross legged on the takht behind the Guru Granth Sahib and a chauri, a whisk of animal hair which is a symbol of regal dignity, is waved over the Guru Granth Sahib as a mark of respect. There are no chairs in the Gurdwara so worshippers sit cross legged on the floor facing the Guru Granth Sahib. ...read more.

The Guru Granth Sahib is the most important object in the Gurdwara. It is treated as a living teacher. This is why it is very important to learn to behave properly in the worship room. Sikh children learn to call it Shri Guru Granth Sahib Ji, which is giving it a title of great respect. A young Sikh girl quoted; "My dad used to give me some money. When I went into the worship room I walked straight up to the front and placed the money in a slot in a large box. Then I knelt and bowed right down to the ground in front of the Guru Granth Sahib with my forehead touching the floor. Without turning around I then walked backwards to find a place to sit. When we sat down we had to be careful that our feet didn't point towards the Guru Granth Sahib. This would be very disrespectful." Men and women sit separately in the worship room so children sit either on their father's or their mother's side. When they are very young they can choose whom they wish to sit with. An elderly lady quoted; "The nearest Gurdwara was thirsty five miles away. So when I was very young we only went about once a month. ...read more.

* At the end of Ardas the sangat says 'Vahiguruji ka Khalsa, Vahiguruji ki fateh' (The Khalsa belongs to God, Victory belongs to God) * The Guru Granth Sahib is opened at random. A small section is read out by the Granthi. Sometimes this is explained. * A small amount of karah prashad is given to everyone. * Langar is served. Karah prashad can be made at home or at the Gurdwara. Because it is sacred food, the person who makes it must have had a bath first. Shoes must be left outside the kitchen. All the utensils, the cooker and the kitchen must be clean. Shabads from the Guru Granth Sahib must be said while the karah prashad is cooking. During the Ardas prayers in the Gurdwara the karah prashad is marked with a kirpan. This is to bless the food. Karah prashad should not be wasted as it is very special. The flag is called the Nishan Sahib and it flies above every Gurdwara. It is made of saffron cloth and the flag pole is covered with the same kind of cloth. In the middle of the flag is the khanda emblem. The actual khanda is the two edged sword in the centre. This symbolizes that there is one God and he is concerned with the truth and justice. The circle, or chakar, represents the one, never ending God. The two kirpans symbolize God's power over both this world and the spiritual world. Sikhism, ...read more.