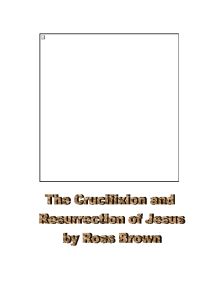 A Junior Roman solider made entries into his diary about the events of the crucifixion.

A Junior Roman solider made entries into his diary about the events of the crucifixion. Dear Diary, Today I saw something I will never forget, the torture, punishment, beating and mockery of an innocent man. We were watching the crowd in Jerusalem, as Pilot asked them which one of the prisoners should be released. They called out Jesus called the messiah!! Jesus called the messiah!! They shouted to crucify him and let the blame be brought to them and their children hereafter. Pilot knew that this man wasn't a traitor or a troublemaker but simply an extremely knowledgeable man. He started to whimper as the whole of C company gathered around him. I saw that mans face, of pure terror. As thought he was going to hell and back! My solders stripped him naked and I knew what was coming next. The had talked the previous day about the torture they would put this man through. I had no authority and I could not stop them. ...read more.

We left down the sandy road once again until we reached Golgotha. I offered Jesus the wine and pain relief mixture but he refused to drink it. He looked afraid scared to death. Jesus was ordered to lie upon the Cross, where I was forced to nail him upon it. The screams of pain and anguish! I sobbed harshly during and after was beaten by the company for refusing to place the other nail into his wrist. I lay upon the stone with a broken nose and a badly body. The rest of the company heaved up the cross and Jesus screamed as the pressure was placed on his arms and legs. His clothes were divided with dice and the cross was engraved with, "This is Jesus, the King of the Jews!" I lay asleep while the other prisoners that had travelled with us were also crucified left and right of Jesus. He looked at them with pity as though he had no power to help them, event though he was in dyer need of assistance. ...read more.

They mocked him and insulted him Jesus just clenched and took the pain. Event he bandits to the sides of him laughed at his stupidity. Dear Diary, After a number of days on duty guarding Jesus, he finally passed away. Today was miraculous and events that struck the heart of the nation were recorded. The country filed with darkness at noon. After 3 hours Jesus suddenly cried out, "my God, my God why did you abandon me?" People started to ask was he calling out for Elijah and thought hard about what would happen. A man approached him and attached a sponge onto a large stick trying to give him something to drink. After a few minutes Jesus cried his last. The earth shook violently and rocks broke apart on the surface, graves were risen and people appeared from them. It was a true miracle. I realised that he really was the son of God. And am God fearing about my punishment to this very hour. Women approached who were following Jesus and told about a storey within he Temple of the holy of holies curtain tearing in that same hour and the Priests fearing Gods Presence throughout the land. ...read more.