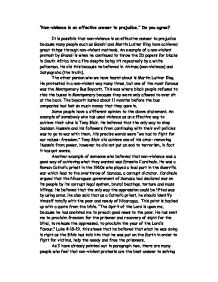 Non-violence is an effective answer to prejudice. Do you agree?

"Non-violence is an effective answer to prejudice." Do you agree? It is possible that non-violence is an effective answer to prejudice because many people such as Gandhi and Martin Luther King have achieved great things through non-violent methods. An example of a non-violent protest by Ghandi is when he continued to throw the ID papers for blacks in South Africa into a fire despite being hit repeatedly by a white policeman. He did this because he believed in Ahimsa (non-violence) and Satyagraha (the truth). The other person who we have learnt about is Martin Luther King. He protested in a non-violent way many times, but one of the most famous was the Montgomery Bus Boycott. This was where black people refused to ride the buses in Montgomery because they were only allowed to ever sit at the back. The boycott lasted about 11 months before the bus companies had lost so much money that they gave in. Some people have a different opinion to the above statement. An example of somebody who has used violence as an effective way to achieve their aims is Tony Blair. ...read more.

In this circumstance I agree as Adolph Hitler was such a dangerous person that the only way to stop him would have been to go to war. He did achieve this which shows that violence can too be an effective way of achieving your aims. Nonetheless, this might not always be the best way of dealing with problems, as Tony Blair's policies in Iraq may have stopped Saddam Hussein but terrorism in both Iraq and this country has increased dramatically causing many deaths. This shows that violence will sometimes make things worse. Even though non-violent protests try to avoid deaths and injuries they can sometimes lead to violent fights which result in many fatalities. An example of a non-violent protest which then became very violent was the Soweto uprising in South Africa on the 16th June 1976. This was when thousands of black children protested about a new law which said they could only be taught in the language Afrikaans. The children protested against the new law by singing songs and waving signs. At first police used gas to try and calm things down, but they then started firing guns. ...read more.

I didn't fight back as I had heard that you should ignore bullies and they would bet bored. I refused to fight back and soon told the teacher what was happening. She then talked to the boys that were bullying me and things got better dramatically. They never tried to hurt me again and although they would still sometimes call me names I didn't care and so just ignored them. Eventually they got bored and left me alone, just like I had been told. I now know that it is a good thing that I didn't retaliate as this would have encouraged them as all they wanted was for me to react. This is an example of an experience of my own where non-violence has proved effective. In conclusion, I believe that wherever possible you should try to use non-violent methods to fight for what is right. Nonetheless there are people who believed that they could only achieve their aims by using violence and did this successfully. They achieved a fairer society and stopped a lot prejudice views. If they hadn't had the courage to fight for they're beliefs people may still today be the victims of serious discrimination and prejudice. ?? ?? ?? ?? ...read more.