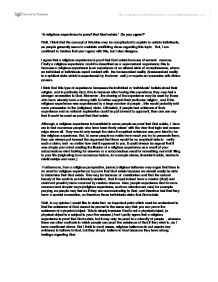 A religious experience is proof that God exists. Do you agree?

Although, a religious experience is beneficial to some people as proof that God exists, there are in fact numerous people who have been firmly raised with the view that logic and reason reign above all. They would only accept the claim if empirical evidence was provided by for the religious experience. But, to some people no matter how much you try to persuade them, they can always put forward the argument that there would be no empirical data to verify such a claim, and no matter how real it appeared to you, it could always be argued that it was simply your mind creating the illusion of a religious experience as a result of your subconscious mind looking for answers or a subconscious need for something more fulfilling in your life (originating from numerous factors, for example stress, financial trouble, strains in relationships and more.) ...read more.

Well, in my opinion I would like to state that an important point which must be understood is that the existence of God cannot be proved in the same way that you can prove the existence of a physical object. This is simply because God is not a physical object, (a physical object is a subject to your five senses.) And I partly agree that a religious experience is proof that God exists, but it may only be proof to a minority of people, whereas there are other methods in which people can proof the existence of God if they wish to, as I have mentioned above. But I think in most cases, religious believers do not require any evidence to believe in God, but they simply believe in God because they have strong feelings regarding God. ?? ?? ?? ?? ...read more.