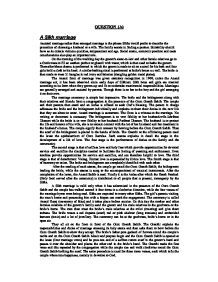 QUESTION (A) A Sikh marriage Assisted marriage rather than arranged marriage is the phrase Sikhs would prefer to describe the procedure of choosing a husband or a wife. The family assists in finding a partner. Suitability should have as its criteria virtuous qualities, temperament and age. Social status, economic position and caste considerations also play an important role. On the morning of the wedding day the groom's sister-in-law and other female relatives go to a Gurduwara to fill an earthen pitcher or gharoli with water, which is then used to bathe the groom. Thereafter khare charna is performed in which the groom is made to sit on a stool for his bath and four girls hold a cloth to his head. A similar bathing ritual is performed at bride's house as well. The bride is then made to wear 21 bangles in red ivory and kalerien (dangling golden metal plates). The Anand form of marriage was given statutory recognition in 1909, under the Anand marriage act, it has been observed since early days of Sikhism. Sikh boys and girls are married according to its form when they grown-up and fit to undertake matrimonial responsibilities. ...read more.

The men then meet the bride's male relatives at the milni (meeting) and give them turbans. The bride wears a red dupatta (scarf) red or pink shalwar (long trousers) and embroided kameez (tunic) and a lot of jewellery. The ceremony can be at the gurdwara, bride's home or in the open air. They all sit on the floor in front of the Guru Granth Sahib. The Granthi explains the responsibilities and duties of marriage stressing its holy status and then asks them to bow before the Guru Granth Sahib to show they accept. The bride's father puts garland of flowers round the couple's necks and on the Guru Granth Sahib. Music and prayers begin and the Guru Granth Sahib is opened at the lavan (four marriage vows) and he puts one end of a saffron cotton scarf in the groom's hand and passes it over the shoulder and places the other end in the bride's hand. The Granthi reads the first verse and this repeated by the congregation while the couple rise and walk clockwise round the Guru Granth Sahib holding the scarf. The same procedure is used for three more verses, each which tells the couple where true happiness, namely in devotion to God. ...read more.

"The beliefs which influence the words and actions of this service have no relevance in the world today." I do not agree with this quote because the words and actions of this service do have relevance in the world today. No matter what language or religion a ceremony is held in it is teaching and saying similar things. The Sikh marriage they are told to look after their family and their community, which is right and they should do that because it is written in the Guru Granth Sahib including the other 3 stages they have to follow. Sikhs are told to believe in God to teach us discipline and how to live life and how to tackle difficult circumstances. Sikhs are also told at the marriage service to detach from stress and to keep focused which helps us to concentrate on what is important in our life. Sikhs are told to be identifies with their partner and to be as one so it can be a good and successful relationship. On the other hand not everybody today believes in God and people can make their own vows. Some people are not religious and do not need words and actions of the marriage service. If people are not believers in any religion they should still respect each other. In today's society we need a common purpose for actions in the marriage. ...read more.