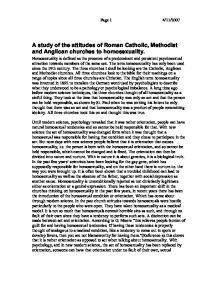 A study of the attitudes of Roman Catholic, Methodist and Anglican churches to homosexuality.

A study of the attitudes of Roman Catholic, Methodist and Anglican churches to homosexuality. Homosexuality is defined as the presence of a predominant and persistent psychosexual attraction towards members of the same sex. The term homosexuality has only been used since the 19th century. The three churches I shall be looking are the Catholic, Anglican and Methodist churches. All three churches look to the bible for their teachings on a range of topics since all three churches are Christian. The English term homosexuality was invented in 1892 to translate the German word used by psychologists to describe what they understood to be a pathology or psychological imbalance. A long time ago before modern science techniques, the three churches thought of all homosexuality as a sinful thing. They took at the time that homosexuality was only an act and that the person can be held responsible, as shown by St. Paul when he was writing his letters he only thought that there was an act and that homosexuality was a product of people committing idolatry. All three churches took this on and thought this was true. Until modern science, psychology revealed that it was rather orientation, people can have natural homosexual tendencies and so cannot be held responsible for that. With new science the act of homosexuality was changed form when it was thought that a homosexual was responsible for having that condition and they chose to participate in the act. But now days with new science people believe that it is orientation that causes homosexuality, i.e. the person is born with the homosexual orientation, and so cannot be held responsible, which cannot be changed and is fixed. The orientation can then be divided into nature and nurture. With in nature it is about genetics, it is a biological truth. In the past few years' scientists have been looking for the gay gene, which has supposedly responsible for homosexuality, and on the other hand there is nurture i.e. the way you were brought up. ...read more.

But they did state that to act upon these feelings by engaging in relations was a sin whether casual or in a stable relationship. The catholic church believes that homosexuality is a condition which if parents of the homosexuals should not condemn their child, but love and care through pastoral care, they should not be rejected and they should urge their child to be sexually inactive. According to the Congregation for the doctrine of faith on homosexuality, there has to be special concern and pastoral attention should be directed towards those who have this condition. The most loving thing is to care for them. According to the Catholic Church you should not use the modern exegesis of scripture, as it will lead confusion. . The Catholic Church uses natural moral law, scripture, tradition and the Magisterium to come to a decision on homosexuality. For Catholics Thomas Aquinas is the main advocate of natural moral law. The Greek philosopher Aristotle impacted Thomas Aquinas (reference f, Summa Contra Gentiles). Natural Moral law is anything that encourages human flourishing. Thomas Aquinas said that you do not need to go to the bible, but look at the world around you (nature). According to Aquinas in the summa contra gentiles, homosexuality goes against natural moral law. It also goes against the complementary of the sexes and marriage. One of main arguments is that homosexuality does not occur on the animal kingdom so human should not as well. This can be disproved because new science techniques show that there are homosexual animal species, so his argument is not true. Aristotle believed that everything serves a purpose. The Christian thinkers of the middle ages looked at nature as showing the purpose of the creator who put order into everything. Nature is created by God therefore it equals God's law. (Reference g, Michael Wilcockson, "sex and relationships"). In the Catechism of the Catholic Church (published in 1994, page 505), the church said that homosexuals do not choose their homosexual condition, for most of them it is a trial. ...read more.

Therefore they will accept homosexual ordained people as long as they remain celibate. The Anglican Church gets rid of the tradition and teaching of the church (Magisterium) because these are man made, so they only use scripture and faith. The Church accepts homosexuality as alright for the laity but not for the ordained clergy. The last church I will look at is the Methodist Church. The Methodist movement split in 1844 over slavery and the power of Bishops. The United Methodist membership's beliefs about homosexuality are split along the conservative and liberal lines. Liberals within in U.M.C generally look at gays and lesbians' ordination and same sex marriages as civil rights issues- that they are fundamental human right issues that should be available to everyone with any sexual orientation. They also believe that homosexuality is natural, naturally orientation for a minority of people. It is neither changeable or is it chosen. The other side of this is conservatives, they believe that homosexual behavior is a sin, against God and condemned throughout the bible. They say that to allow a homosexual to be ordained would be an attack on the historical church. They believe that Marriage is for one man and one woman. Homosexuality is abnormal and unnatural. They Methodist Church is referred to as the mainline of the Christian denominations, where they go the others follow. Divine Command theory is associated with the Conservatives. Civil rights come from the state/government. The conservatives say that since the practice of homosexuality is incompatible with Christian teachings, self-avowed practicing homosexuals are not to be accepted as candidates ordained as ministers or appointed to serve in the United Methodist Church. There could be in the future a church split between the liberals and conservatives with in the Methodist Church. There is two options that is for the church to split into two groups or fir their to be a local opinion i.e. the decision to ordain sexually active gays and lesbians could be delegated to the individual congregations or regional conferences all over homosexuality. ...read more.