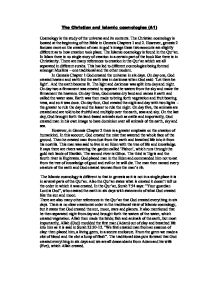 a1 a2 a3 and part b religious coursework

The Christian and Islamic cosmologies (A1) Cosmology is the study of the universe and its contents. The Christian cosmology is located at the beginning of the Bible in Genesis Chapters 1 and 2. However, genesis 2 focuses more on the creation of man in god's image these two accounts are slightly different as to how creation took place. The Islamic cosmology is found in the Qur'an. In Islam there is no single story of creation in a certain part of the book like there is in Christianity. There are many references to creation in the Qur'an which are all separated in different surahs. This has led to different cosmologies being formed amongst Muslims - one traditional and the other modern. In Genesis Chapter 1 God created the universe in six days. On day one, God created heaven and earth but the earth was in darkness when God said: 'Let there be light'. And the earth became lit. The light and darkness was split into day and night. On day two a firmament was created to separate the waters from the sky and make the firmament the heavens. On day three, God creates dry land and names it earth and called the water seas. Earth was then made to bring forth vegetation and fruit bearing tress, and so it was done. On day four, God created the night and day with two lights - the greater to rule the day and the lesser to rule the night. ...read more.

Genesis states that the universe was created in six days, rather than 15 billion years. However, some Muslims dispute that it should be interpreted as six ages rather than six days. Another contradiction is in the order in which things were created and who or what started the universe. The Bible states that God created the heavens and earth on day one - contradictory to science, which says the earth formed over billions of years, which they back up with sophisticated evidence that is difficult to deny. The idea that humans evolved also contradicts the religious cosmologies. Christianity and Islam states that God created humans separately to the animals of the sea, land and air. But scientists assert that we evolved from animals and that our closest relatives are chimpanzees. These are two completely different ideas but the scientific to most people seem the most likely as you are faced with such undeniable evidence such as fossils. An interesting contradiction is the fact that scientists have discovered dinosaur bones and these are not accounted for in the religious cosmologies. Scientists say that the discovery of fossilised dinosaurs is evidence of the scientific cosmology. This is because dinosaurs aren't mentioned in the religious cosmologies and dinosaurs helped to prove the theory of evolution. A3 Many scientists believe the study of the universe through science can actually support the belief in God and the religious cosmologies. ...read more.

This means that if you're a scientist and believe in the scientific cosmology you can't possibly be religious. But this is only true for fundamentalists, a scientist could be a conservative or liberal which allow for slight changes and can slightly account for the scientific cosmology suggesting science is proof of God. Another reason for why people would agree with this statement as it is seen that religion and the sciences contradict one another; science is based on facts and religion on theories that can't be proven. The scientists work and beliefs would get in the way of each other changing both of them this is why they have to be non-religious. In my conclusion I still disagree with the statement and can be religious because look at the universe and remember that scientists say there's an explanation for everything so where is the explanation of the big bang. Could the universe not have a designer? You can be a religious scientist and even believe in the scientific cosmology as you can believe in the designer of the universe which is god. The universe is much to complicated to just be sheer luck as it has taken many steps to have life on earth such as stars when they supernovae to give life giving elements. Also religious scientists still exists today which show that it is possible to be a religious scientist. ...read more.