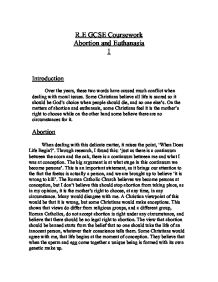 Abortion and Euthanasia - the ideological conflict within Christianity

R.E GCSE Coursework Abortion and Euthanasia 1 Introduction Over the years, these two words have caused much conflict when dealing with moral issues. Some Christians believe all life is sacred so it should be God's choice when people should die, and no one else's. On the matters of abortion and euthanasia, some Christians feel it is the mother's right to choose while on the other hand some believe there are no circumstances for it. Abortion When dealing with this delicate matter, it raises the point, 'When Does Life Begin?'. Through research, I found this: 'just as there is a continuum between the acorn and the oak, there is a continuum between me and what I was at conception. The big argument is at what stage in this continuum we become persons'. This is an important statement, as it brings our attention to the fact the foetus is actually a person, and we are brought up to believe 'it is wrong to kill'. The Roman Catholic Church believes we become persons at conception, but I don't believe this should stop abortion from taking place, as in my opinion, it is the mother's right to choose, at any time, in any circumstance. Many would disagree with me. A Christian viewpoint of this would be that it is wrong, but some Christians would make exceptions. ...read more.

A woman who is risking dying should be allowed to abort. (Abortion Reform Group) Some arguments against abortion: The unborn child is alive from the moment of conception and has the right to life. An abortion is child killing (infanticide): This like in the 'in favor' section depends on what the mother's belief is, of when the child is alive. If abortions are easily obtained, they maybe used as another form of contraception, encouraging people to have a more lax attitude to sex: Some Christians believe that sex should be saved for marriage. If there is a more lax attitude to sex, people are not treating it with the respect some Christians believe it should have. Many couples would want to adopt an unwanted baby, but the numbers of these have been reduced due to abortion: This point would be countered by a Christian in favor of abortion, 'As long as there are foster homes, there is an abundance of potential foster children. The woman afterwards may feel guilty and depressed and may become suicidal: A Christian view would be to get the woman to a councilor, to avoid this happening. The operation may lead to sterility, or damage the woman for life: A Christian would argue this point. There would be no need for abortion if there were sufficient provision to help them overcome emotional and financial difficulty: This point epitomizes what many Christians would like in society. ...read more.

'God should choose how everyone dies', 'God wants people to have quality of life'. It lessens pain for the patient: The quality of life quote overlaps with this argument, as if there is no quality of life, then there is no reason in living. People should not have to live if there is no chance of getting better: Some Christians would say 'God should choose how everyone dies', to this argument. It stops the suffering of relatives watching the patient die a slow and painful death: Arguments against euthanasia: Mistakes can happen. There are painkilling drugs: this is true, but there is no quality of life, while drugged up. The dying patient might not be in the right state of mind while choosing to die quickly: This mental based problem is tackled by psychiatrists before euthanasia takes place. Patients could lose faith in doctor's. Euthanasia is no better than murder: This is a dubious argument, which can be argued considerably by Christians either way. If the patient is unable to choose, then who does: This links in with the dilemma, 'who switches off the life support machine?' Again, Christians choices would be split down the middle. The Bible's/Christian's view You shall not murder; God gave everything life, so life should be treated as a gift from God; God helps no matter what and never gives us more suffering than we can take; Finally, only God can decide what will happen to you, not other people. ...read more.