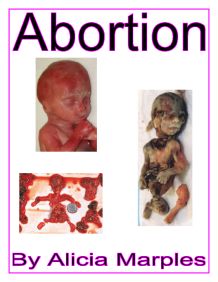 People who are in favour of abortions argue the point that: If abortions were only performed under very strict rules then more people would have illegal abortions. They also think that it is wrong for a woman to bring an unwanted human life into the world, as especially later on in life the child could suffer from rejection, loneliness and not have a positive view on life. If a woman was raped the people 'for abortions' believe that the women should not be forced to have the baby. They believe that abortion isn't killing a life, just destroying a group of cells which couldn't survive outside the womb anyway within the 24 weeks that the women would have to abort the child. A woman could be at risk of dying or being handicapped from having a baby and if she already has children she needs to look after this may not be an appropriate risk. The strongest belief a person who agrees with abortions has is that a woman has total control over her own body and has the choice of what to do with it, the foetus is inside the women so is part of herself and therefore it's up to her on whether or not she chooses to have an abortion. People who disagree with abortions argue the points that: An unborn child is alive from the moment that the egg has been conceived and having an abortion is killing a child (infanticide). They think that if abortion was less strict then more people would think casually about sex and not worry if they get pregnant or not. Many women commit suicide or feel extremely guilty after abortions and a lot of parents are willing to adopt unwanted children to save there lives. Aborting handicapped children could insult handicapped people who are alive at the moment. If there was enough emotional and financial support to women there would be fewer abortions happening. ...read more.

Pro-choice is a group that are for women's free choice on the topic of abortion, they protest against people who try to make decisions for other people and influence women to do what they feel is right not what other people want them to do. Christians who are against the idea of abortion put this belief into action by expressing their opinions in conversation and they also use quotes and teachings from the bible to back up their opinions on why they think what they do. Some anti-abortion Christians pray to God and ask him to help people to choose not to have abortions. A few of these Christians become sex educators and guide teenagers not to have abortions and influence their opinions by explaining to the teenagers why they believe they shouldn't abort babies if they do get pregnant. The Christians against abortion also put their beliefs into action by putting themselves forward to adopt children, baby-sit them, child mind them and generally help out the parents who need it. Anti-abortion groups such has Pro-life and SPUC (society for the protection of the unborn child) believe that every child deserves to live and they take part in protests against abortions to express their beliefs. Some Christians vote for MP's who also believe abortion is wrong and they write letter to MP's and the government to ask if they could minimize abortion time from 24 weeks to lower, they explain why and put their arguments across. 'Abortion is never justified.' Do you agree? Give Reasons to support your answer and show that you have thought about different points of view. You must refer to Christianity in your answer. I used a range of sources to research the topic of abortion including: Background Information Religious Studies Teacher- Mrs Halton Books Christianity and Moral Issues- Anne Jordan Religious Studies- Letts GCSE Religious Studies- BBC GCSE Christian Perspectives- Libby Ahluwalia Quotes The Bible Video Peoples experiences and opinions on Abortion Websites Statistics http://www.dh.gov.uk/PublicationsAndStatistics/Publications/PublicationsStatistics/PublicationsStatisticsArticle/fs/en?CONTENT_ID=4116461&chk=6T9UTA Ways of abortion http://www.abortioninfo.net/facts/whatis2.shtml Christian views on abortion http://www.faithnet.org.uk/KS4/Matters%20of%20Life%20and%20Death/christianabortion.htm ?? ?? ?? ?? - 1 - ...read more.