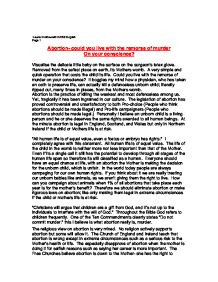 Abortion- could you live with the remorse of murder on your conscience?

Lauren Holdsworth GCSE English Page 1 Abortion- could you live with the remorse of murder On your conscience? Visualise the delicate little baby on the surface on the surgeon's latex glove. Removed from the safest place on earth, its Mothers womb. A very simple and quick operation that costs the child its life. Could you live with the remorse of murder on your conscience? It boggles my mind how a physician, who has taken an oath to preserve life, can actually kill a defenceless unborn child; literally ripped out, many times in pieces, from the Mothers womb. Abortion is the practice of killing the weakest and most defenceless among us. Yet, tragically it has been ingrained in our culture. The legislation of abortion has proved controversial and unsatisfactory to both Pro-choice (People who think abortions should be made illegal) and Pro-life campaigners (People who abortions should be made legal.) Personally I believe an unborn child is a living person and he or she deserves the same rights awarded to all human beings. At the minute abortion is legal in England, Scotland, and Wales but only in Northern Ireland if the child or Mothers life is at risk. ...read more.

Abortion does not solve social problems, such as unstable relationships, poor housing and financial insecurity, which lead women to seek to end their pregnancies. Abortion merely makes the problem worse in many cases, leaving no trace of the baby but a guilty conscience behind. I think if this was the situation that women had the choice of abortion then it would trigger off umpteen problems within society, like more under aged sex. Which is not what we want at all, we want mothers to stop slaughtering their babies because they don't want them. They can't get away with killing someone because they don't want them in their lives. It's not the babies' fault they were conceived, so why make the baby suffer? 1% of all abortions are used to protect the selfish mother's life. They don't care about the baby they are harming in the process just as long as they are free from it. On the other hand "If an unborn child has a disease or defect of some kind then the quality of life of the child will be low. ...read more.

Also having the baby may be very traumatic for the mother as it might bring horrid memories of her ordeal back. I think in this case an abortion would be best for mother and baby. Why should the child be brought up in an environment where its not loved or wanted? I think rape is very sad, because it just shows what is really going on in the world to day. I see no point at all why someone would want to cause so much pain and hurt. To leave them with a burden like a permanent reminder, the victim would never be able to get over their ordeal ever. This is why I feel so strongly about abortion in the case of rape. In conclusion I think there should be rigorous laws on abortion like only making them available in a case of rape or the child or mothers life is greatly at risk. I do not agree with using abortion as a contraceptive, I think this should be completely banned. I don't know how Mothers can have an abortion and not feel any sense of guilt at all. How they can live with the remorse of murder on their conscience beats me. ...read more.