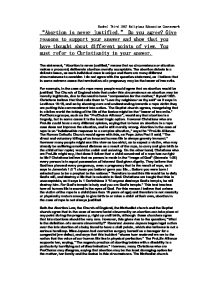 &quot;Abortion is never justified.&quot; Do you agree? Give reasons to support your answer and show that you have thought about different points of view. You must refer to Christianity in your answer.

Rachel Third 10AT Religious Education Coursework "Abortion is never justified." Do you agree? Give reasons to support your answer and show that you have thought about different points of view. You must refer to Christianity in your answer. The statement, "Abortion is never justified," means that no circumstance or situation makes a procured, deliberate abortion morally acceptable. The abortion debate is a delicate issue, as each individual case is unique and there are many different circumstances to consider. I do not agree with the question statement, as I believe that in some extreme cases the termination of a pregnancy may be the lesser of two evils. For example, in the case of a rape many people would agree that an abortion would be justified. The Church of England state that under this circumstance an abortion may be morally legitimate, due to the need to have "compassion for the mother," Synod 1993. Christians believe that God calls them to "Love thy neighbour as thy self" as it says in Leviticus 19:18, and so by showing care and understanding towards a rape victim they are putting this commandment into action. The Baptist church agrees, recognising that in a fallen world the taking of the life of the foetus might be the "lesser of two evils." ProChoice groups, such as the "ProChoice Alliance", would say that abortion is a tragedy, but in some cases it is the least tragic option. ...read more.

On the other hand, the Roman Catholic church does not see abortion as acceptable in these circumstances, believing that "Direct abortion is always gravely contrary to the moral law," The Catechism 1994. They believe that God values every human life, and that despite its physical or mental state it is still sacred to God. Mother Teresa, a Roman Catholic nun said, "God has created us to love and to be loved, in his own image, as evidence of his love. For this reason I say that abortion is the greatest evil." Roman Catholics might use Luke 12:6-7 to support there belief, as it says, "Are not sparrows sold for two pennies? Yet not one of them is forgotten by God. Indeed the very hairs on your head are counted. Don't be afraid - you are worth more than many sparrows." This means that God cares about all of his creations, even the sparrows, and God promises that human beings much more valuable to him than sparrows. God knows every little detail about every person and everyone is unique, whether they are handicapped or perfectly healthy. I believe that abortion is not justified in the case of a foetal abnormality, as in doing so we are declaring the disabled and handicapped as "sub-standard" human beings, and implying that they do not have the same right to life as others so lucky as to be born without abnormalities. ...read more.

The Roman Catholic Church teaches that only in the case of cancer of the womb, or in the case of ectopic pregnancy, where the operation carried out for the purpose of saving the mother would kill the unborn child, the operation is permissible and necessary, as abortion is not the prime intention. The loss of the baby is a consequence of treating the mother. This is Rachel Third 10AT Religious Education Coursework called "Double Effect." In Law, if the continuation of a pregnancy seriously threatens the life of the mother an abortion can be carried out at any point up until birth. All the churches agree that if abortion is to be avoided, alternatives must be available. These include adoption, fostering, the use of contraception initially and effective sex education. There are many tragic situations where a mother may not feel able to care for and take responsibility for a child. Some people think that it is wise in these cases of extreme hardship for the women to put her baby up for adoption, where it has the chance to be loved and nurtured in a caring environment, rather than resort to abortion. The Roman Catholic Church states that we need to solve all the "sorrows and miseries" that lead women to seek abortion. Christians live in hope; the Methodist church teaches that it is strongly preferable that abortions become unnecessary in the future, and the Church of England agree that Christians should work together and try to provide real alternatives to abortion. ...read more.