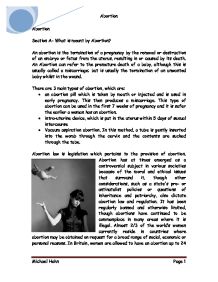 Abortion Section A- What is meant by Abortion? An abortion is the termination of a pregnancy by the removal or destruction of an embryo or fetus from the uterus, resulting in or caused by its death. An Abortion can refer to the premature death of a baby, although this is usually called a miscarriage; but is usually the termination of an unwanted baby whilst in the wound. There are 3 main types of abortion, which are: * an abortion pill which is taken by mouth or injected and is used in early pregnancy. This then produces a miscarriage. This type of abortion can be used in the first 7 weeks of pregnancy and it is safer the earlier a woman has an abortion. * intra-uterine device, which is put in the uterus within 5 days of sexual intercourse * Vacuum aspiration abortion. In this method, a tube is gently inserted into the womb through the cervix and the contents are sucked through the tube. Abortion law is legislation which pertains to the provision of abortion. Abortion has at times emerged as a controversial subject in various societies because of the moral and ethical issues that surround it, though other considerations, such as a state's pro- or antinatalist policies or questions of inheritance and patriarchy, also dictate abortion law and regulation. It has been regularly banned and otherwise limited, though abortions have continued to be commonplace in many areas where it is illegal. Almost 2/3 of the world's women currently reside in countries where abortion may be obtained on request for a broad range of social, economic or personal reasons. In Britain, women are allowed to have an abortion up to 24 weeks however there is still discussion to whether the time should be put down to 20 weeks as a baby can survive up to 20 weeks. After 24weeks of pregnancy a procured abortion is illegal; this is because if the child was to be born premature, there would be a chance of survival. ...read more.

Roman Catholics believe: * Life begins at conception - the foetus is a human being with human rights. * All bible teaching on human life also applies to the foetus - especially the commandment (6th) 'Do not kill'. * If a mother cannot support her baby then it should be adopted. * Life is sacred because it is given by God - 'created in the image of God' (creation story). Here are some quotes from the Roman Catholic teachings. Here are some Roman Catholic Teachings: "Human life is sacred". Humanae Vitae, 1968: "The unborn human being's right to live is one of the inalienable human rights" Pope John Paul II, 1985 "From the time that the ovum is fertilised a new life is begun which is neither that of the father or the mother. It is the life of a new human being with its own growth. It would never become human if it were not human already" Declaration on Procured Abortion (1974) The theological basis of this is that the foetus is God given life, with the potential to develop relationships, think, pray, choose and love. So as the 1983 Synod Resolution put it: "All human life, including life developing in the womb, is created by God in his own image and is, therefore, to be nurtured, supported and protected." These quotes tell us how serious the Catholic Church takes abortion, and under no circumstances do they accept it. Anglicans & Methodists: Believe : * Life does not begin until the baby has a chance to survive independently from the mother. * Abortion is wrong BUT justifiable if there was a chance of greater harm to the mother, or if she had been raped. They believe this because: "Although the foetus is to be specially respected and protected, nonetheless the life of the foetus is not absolutely sacrosanct if it endangers the life of the mother." ...read more.

We are all unique, with our own DNA. Everyone is different and an aborted child could have had the potential to do great things, they could have become a scientist who could have discovered marvelous things; a doctor who could have saved people from dyeing; or maybe a parent themselves who could provide for a child to have the extraordinary experience of life. I could argue that doctors and nurses have taken an oath to save lives not take them away, this goes against the Hippocratic Oath. The Catholic Church would say no whatever the reason. They have very strict views on termination, as they believe that a human foetus is still a human and therefore should not be killed. The Anglican (Church of England) and Methodist churches believe that a foetus is only a human when it has the chance to live independently from the mother. Abortion shouldn't be used as a means of contraception but if it would be harmful to the mother or the child then it is acceptable. The Bible has thousands of ideas inside it. Someone can take a piece of evidence and use it to make their argument seem true. There will never be a definite answer to whether "Abortion is never justified" or not, but we can only have our opinions. To get a true opinion on the matter, you have to have examined all of the possible evidence rather than simply picking out single pieces of information. As I have read the Bible all of the way through and having learnt many things from writing this document I feel comfortable to make my mind up. Although everyone is entitled to their own opinion and I would never say that I am definitely correct, I believe that abortion is very rarely the right option and that it should only be used when it becomes the final option and that it would stop a child from having a poor quality of life. ?? ?? ?? ?? Abortion Michael Hahn Page 1 ...read more.