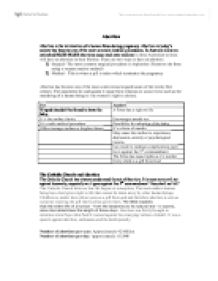 Abortion. The Catholic Church has always condemned the act of abortion. It is seen as an evil act against humanity,

Abortion Abortion is the termination of a human fetus during pregnancy. Abortion in today's society has become one of the most common medical procedures. In Australia alone an estimated 80,000-90,000 abortions occur each year and one in three Australian women will have an abortion in their lifetime. There are two ways to have an abortion 1) Surgical- The most common surgical procedure is Aspiration ( Removes the fetus using a vacuum suction method) 2) Medical- This is where a pill is taken which terminates the pregnancy Abortion has become one of the most controversial argued issues of the twenty first century. The arguments for and against it range from religious to social views such as the murdering of a human being to the women's right to choose. ...read more.

It is seen as an evil act against humanity, especially as it goes against the 5th commandment 'thou shall not kill' The Catholic Church believes that life begins at conception, That each unborn human being has a God given right to life that cannot be taken away by other human beings. Children no matter how old are seen as a gift from god and therefore abortion is seen as someone rejecting the gift that God has given them. The Bible explains that the entire life of a human - from the beginning to its natural end - is sacred, since God determines the length of those days. Abortion was firstly brought to attention when Pope John Paul II warned against the emerging 'culture of death'. ...read more.

If you want equal justice for all and true freedom and lasting peace, then America, defend life."( http://www.prolife.com/celeb.htm) Mother Teresa- The greatest destroyer of love and peace is abortion, which is war against the child. The mother doesn't learn to love, but kills to solve her own problems. Any country that accepts abortion is not teaching its people to love, but to use any violence to get what they want." (http://www.prolife.com/celeb.htm) Before I formed you in the womb I knew you, and before you were born I consecrated you. (Jer 1:5; cf. Job 10:8-12; Ps 22:10-11) "See that you do not despise one of these little ones, for I say to you, that their angels in heaven continually behold the face of My Father who is in heaven" (Matthew 18:10). http://lifenetwork.org.au/_blog/Abortion_in_Australia/tag/Statistics/ http://www.world-faiths.com/GCSE%20Short%20course/social_reasons_for_and_against_abortion.htm http://womensissues.about.com/od/reproductiverights/a/AbortionTypes.htm http://www.rsrevision.com/GCSE/christian_perspectives/life/abortion/against.htm http://www.catholic.com/library/Abortion.asp http://www.godandscience.org/doctrine/prolife.html http://www.prolife.com/celeb.htm By Ebony ...read more.