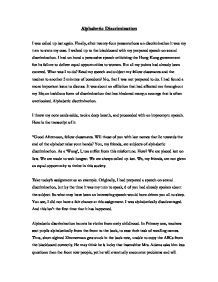 Alphabetic Discrimination I was called up last again. Finally, after twenty-four presentations on discrimination it was my turn to state my case. I walked up to the blackboard with my prepared speech on s****l discrimination. I had on hand a persuasive speech criticizing the Hong Kong government for its failure to deliver equal opportunities to women. But all my points had already been covered. What was I to do? Read my speech and subject my fellow classmates and the teacher to another 5 minutes of boredom? No, that I was not prepared to do. I had found a more important issue to discuss. It was about an affliction that had affected me throughout my life; an insidious form of discrimination that has hindered many; a scourge that is often overlooked. ...read more.

So what may have been an interesting speech would have driven you all to sleep. You see, I did not have a fair chance at this assignment. I was alphabetically disadvantaged. And this isn't the first time that it has happened. Alphabetic discrimination haunts its victim from early childhood. In Primary one, teachers seat pupils alphabetically from the front to the back, to ease their task of recalling names. Thus, short sighted Zimmerman gets stuck in the back row, unable to copy the ABCs from the blackboard correctly. He may think he is lucky that insensitive Mrs. Adams asks him less questions than the front row people, yet he will eventually encounter problems and will receive lower SAT scores. ...read more.

In desperation he logs on to and online dating database to find a companion, But this also proves disappointing. For who chooses the Zs first when given an alphabetical list My fellow classmates, the hypothetical example I have just given you can be backed up by evidence too. Of the past 10 American Presidents, 7 have had last names in the 1st half of the alphabet. 6 out of 7 heads of government of the G7 countries are alphabetically advantaged - Belusconi, Blair, Bush, Chirac, Chretien and Koizumi. The world's five richest men are Albrecht, Allen, Buffett, Ellison and Gates. I hope i have made my case and brought your awareness to this silent, yet nefarious form of discrimination. Perhaps we should stop sorting this out in alphabetical order. This is one form of discrimination we must tackle to give everyone in this world Equal Opportunities. Thank you." ...read more.