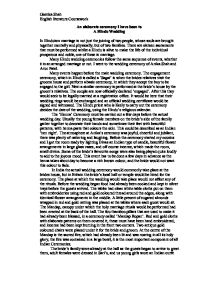 An elaborate ceremony I have been to - A Hindu Wedding

An elaborate ceremony I have been to A Hindu Wedding In Hinduism marriage is not just the joining of two people, whose souls are brought together mentally and physically, but of two families. There are sixteen sacraments that must be performed whilst a Hindu is alive to make the life of the individual prosperous and noble, one of these is marriage. Many Hindu wedding ceremonies follow the same sequence of events, whether it is an arranged marriage or not. I went to the wedding ceremony of Anika Shah and Arun Patel. Many events happen before the main wedding ceremony. The engagement ceremony, which in Hindi is called a 'Sagai' is when the brides relatives visit the grooms house and perform a basic ceremony, in which they accept the boy to be engaged to the girl. Next a similar ceremony is performed at the bride's house by the groom's relatives. The couple are now officially declared 'engaged'. After this they would seek to be legally married at a registration office. It would be here that their wedding rings would be exchanged and an official wedding certificate would be signed and witnessed. The Hindu priest who is likely to carry out the ceremony decides the date of the wedding, using the Hindu's religious calendar. ...read more.

Red and gold cloths with elaborate patterns on them covered it, these must have been hand embroidered, and incense had been kept burning in the front two corners. Two antique gold coloured chairs were placed under it for the bride and groom. At the centre of the Mandap is the sacred fire, which had already been lit and was roaring in all its holy glory, the fire was contained in a large bowl, it is the most important component of all Indian Ceremonies. The bride's family were already at the hall as the guests began to arrive to greet them, adult females were dressed in Sari's, and us young girls wore an Indian outfit consisting of a skirt and matching top adorned with mirrors and beads. The men wore a Kafni (a long shirt extending to the knees) with pijamo (leggings), this is also what the groom would wear, no one wore any dark colours such as black because weddings are joyous occasions. Anika was wearing a stunning red and white sari, draped modestly over her hair, along with plenty of gold jewellery, bangles, anklets and earrings that joined to a piece in her hair, which was done up in a bun entwined with fresh white flowers. ...read more.

The couple were joined together by a holy thread and held hands as they did this. You could see the happiness in Anika and Shivagi's faces beaming out. Each step they took symbolised in this order food, strength, wealth and prosperity, good fortune and wisdom, children and fertility, the seasons and the enjoyment of pleasures and finally for the seventh step a close union and everlasting friendship. Whilst standing the groom put some vermilion in the parting of the Anika's hair, the powder represented the life giving blood that flows in all of us. He then gave her an auspicious necklace called a 'Mangalsutra' to signify their marriage; this is made of gold and glass beads. Finally the priest offered ghee into the sacred fire thereby completing the wedding ceremony, and for the last time blessed the couple for there future together. It was also then that we, the relatives and guests could great the newly married couple, and shower them with our blessings of usually flowers and rice. Watching such an elaborate and time taking event is truly wonderful. The extent of effort that is put into any Hindu wedding that is similar to the one I have described is without a doubt evident. Geetika Shah English literature Coursework ...read more.