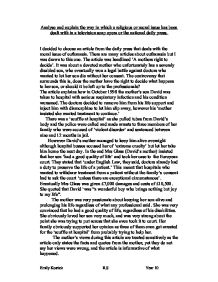 Analyse and explain the way in which a religious or moral issue has been dealt with in a television soap opera or the national daily press.

Analyse and explain the way in which a religious or moral issue has been dealt with in a television soap opera or the national daily press. I decided to choose an article from the daily press that deals with the moral issue of euthanasia. There are many articles about euthanasia but I was drawn to this one. The article was headlined 'A mothers right to decide'. It was about a devoted mother who unfortunately has a severely disabled son, who eventually won a legal battle against doctors who wanted to let her son die without her consent. The controversy that surrounds this is, does the mother have the right to decide what happens to her son, or should it be left up to the professionals? The article explains how in October 1998 the mother's son David was taken to hospital with serious respiratory infection and his condition worsened. The doctors decided to remove him from his life support and inject him with diamorphine to let him slip away, however his 'mother insisted she wanted treatment to continue.' ...read more.

She obviously loved her son very much, and was very strong about the point she was trying to put across that she even took it to court. Her family obviously supported her opinion as three of them even got arrested for the 'scuffle at hospital' from probably trying to help her. The mother's views during this article are treated sensitively as the article only states the facts and quotes from the mother, yet they do not say her views were wrong, and the article is informative of what happened. Furthermore the article was not biased because even though it mainly showed the mothers story, it didn't ever state that the mother was the one that was right because it only quoted her views. However they also quoted the doctors and the hospitals views. For example hospital bosses accused David's mother 'of extreme cruelty'. Therefore it shows the other side that maybe it was cruel to keep him alive considering all his disabilities. Furthermore it shows the opinions of the anti-euthanasia campaign who were 'delighted at the decision'. ...read more.

For example if someone else had a severely disabled child they would know how that certain mother dealt with the difficulties of dealing with euthanasia and furthermore it could encourage people to speak up more if they do not agree with something. Some articles there are serious messages behind; this one is that people should stand up for their rights, and should not let people take away their rights if they know it is unjust. For example Mrs Glass stood up for her sons rights until she got her point across. I think that this article was well written and very informative of what happened had happened. However it was not biased over the mother even thought it mainly explained the mother's story of her son and how she battled for his rights. It did well on giving both sides of the argument and leaves, me us still undecided on who was right, yet informs us all on what had happened. I think this topic is a very controversial and sensitive issue yet the writer did well to explain it without being biased and without offending certain people. Words -1000 ?? ?? ?? ?? Emily Kostick R.S Year 10 ...read more.