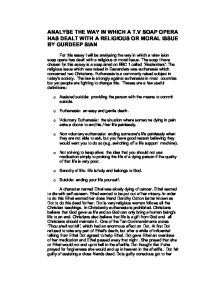 Analyse the Way In Which a T.V Soap Opera Has Dealt With a Religious or Moral Issue.

ANALYSE THE WAY IN WHICH A T.V SOAP OPERA HAS DEALT WITH A RELIGIOUS OR MORAL ISSUE BY GURDEEP SIAN For this essay I will be analysing the way in which a television soap opera has dealt with a religious or moral issue. The soap I have chosen for this essay is a soap aired on BBC 1 called 'Eastenders'. The religious issue which was raised in Eastenders was euthanasia which concerned two Christians. Euthanasia is a commonly raised subject in today's society. The law is strongly against euthanasia in most countries but yet people are fighting to change this. Theses are a few useful definitions: o Assisted suicide: providing the person with the means to commit suicide. o Euthanasia: an easy and gentle death. o Voluntary Euthanasia: the situation where someone dying in pain asks a doctor to end his / her life painlessly. ...read more.

Christians also believe that life is a gift from God and all Christians should maintain it. One of the Ten Commandments states 'Thou shall not kill', which had an enormous effect on Dot. At first Dot refused to take any part of Ethel's death, but after a while of influential talking from Ethel Dot agreed to help Ethel. Dot gave Ethel an overdose of her medication and Ethel passed away that night. She prayed that she or Ethel would not end up in h**l in the afterlife. Dot thought that if she prayed for forgiveness she would end up in heaven in the afterlife. Dot felt guilty of assisting a close friends dead. Dots guilty conscious got to her and she wanted to be punished for what she did. Dot then went to a shop and began shoplifting for the reason that she wanted to be arrested and sent to prison. ...read more.

The major reason for being against euthanasia is because of the fact that it's simply murder. However other people consider euthanasia to be acceptable. One motivation for this argument is for the reason that many people feel that it's a basic human right to have control of your own life. For instance if someone was critically suffering then that person has the right to end his/her own life. What's more is that if you have the right to commit suicide, then you have the right to ask a doctor to assist your suicide if you are ill and in pain and unable to commit suicide yourself. After taking into consideration both sides of the argument I have come to a conclusion, and my own personal opinion is that euthanasia should be allowed. Even taking into account it will affect the loved ones of someone I still believe if someone is in so much pain he/she couldn't take it any more, subsequently it would seem fair to respect their decision. ...read more.