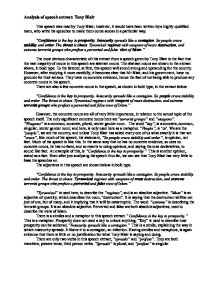 Analysis of speech extract: Tony Blair This speech was read by Tony Blair; however, it would have been written by a highly qualified team, who write his speeches to make them come across in a particular way. "Confidence is the key to prosperity. Insecurity spreads like a contagion. So people crave stability and order. The threat is chaos. Tyrannical regimes with weapons of mass destruction, and extreme terrorist groups who profess a perverted and false view of Islam." The most obvious characteristic of this extract from a speech given by Tony Blair is the fact that the vast majority of nouns in this speech are abstract nouns. The abstract nouns are shown in the extract above, in bold type. To the listener, at first, this speech will sound strong and upstanding for the country. However, after studying it more carefully, it becomes clear that Mr Blair, and his government, have no grounds for their actions. ...read more.

Much of his speech is like this. In the same way that he has no concrete evidence, so uses no concrete nouns, he has no facts, and so resorts to using opinions, and saying them as declaratives, to sound like fact. An example of this, is "Confidence is the key to prosperity." This is another opinion, stated as a fact. Even after just analysing his speech thus far, we can see that Tony Blair has very little to base his speeches on. The adjectives in this speech are shown below in bold type. "Confidence is the key to prosperity. Insecurity spreads like a contagion. So people crave stability and order. The threat is chaos. Tyrannical regimes with weapons of mass destruction, and extreme terrorist groups who profess a perverted and false view of Islam." "Tyrannical" is used here, to describe the "regimes", and is an absolute adjective. "Mass" is an adjective of quantity, which describes the noun, "destruction". ...read more.

Below are the connotations that came to my mind from this speech extract. Confidence: strength upstanding, expectation, conviction Prosperity: success, wealth, improvements Insecurity: fear, anxiety Contagion: infection, fast-spreading, unstoppable Stability: happiness, safe, strength Chaos: crazy, disorder, confusion, pandemonium Tyrannical: cruelty, fear, domineering, unbeatable Weapons: danger, fear, death, destruction Destruction: chaos, devastation Terrorist: fear, death, unjust In summary, Blair's listeners will rarely analyse his speech word for word, so it works to his advantage to use many of these techniques to put across his speech, even though most of it is not entirely what will be interpreted by his listeners. There are few facts, just opinions, stated as facts, to make them sound as if they have strength and conviction. Whether Blair has just stretched the truth, or completely lied, he can not go back on his word, so whatever he says now must follow on from previous speeches. This means that he cannot admit that he is, or ever was, wrong; hence the abstractness of his speech. ...read more.