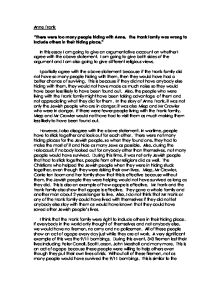 Anne Frank There were too many people hiding with Anne. The Frank family was wrong to include others in their hiding place. Discuss. I am going to give both sides of the argument and I am also going to give different religious views.

Anne Frank "There were too many people hiding with Anne. The Frank family was wrong to include others in their hiding place." In this essay I am going to give an argumentative account on whether I agree with the above statement. I am going to give both sides of the argument and I am also going to give different religious views. I partially agree with the above statement because if the Frank family did not have so many people hiding with them, then they would have had a better chance of surviving. This is because if they did not have anybody else hiding with them, they would not have made as much noise so they would have been less likely to have been found out. Also, the people who were living with the Frank family might have been taking advantage of them and not appreciating what they did for them. In the story of Anne Frank, it was not only the Jewish people who are in danger; it was also Miep and Mr Crawler who were in danger. If there were fewer people living with the Frank family, Miep and Mr Crawler would not have had to visit them as much making them less likely to have been found out. ...read more.

Even though this is a Christian story, it can also be applied in a Jewish context. An example of this is during WWI a young Jewish soldier was in Germany and decided to go to the local Synagogue. After the service he was greeted by a kind German Jew by the name of Herr Rosenau who then invited him to go to his house for Shabbat. The Jewish soldier had a wonderful time and the experience really moved him. It moved him so much that he sent a letter to Herr Rosenau saying how grateful he was. This letter was forgotten for 21 years and when it was finally found WWII had begun. Obviously, Herr Rosenau and his family were in trouble because they were Jewish so they sent a letter back to the Jewish soldier asking if he and his family could go and live with him. Out of the kindness of the soldier's heart, he said yes and saved the lives of Herr Rosenau and his family. This story shows that sometimes people help others out of the kindness of their hearts and do not expect anything in return. ...read more.

Anyway you help somebody can also be called agape. Agape means an act of love so if you go out of your way to help somebody, you are showing agape. Mr Frank and the Frank family showed agape because the let other people stay with them, even though it made life more uncomfortable for them. Some people may argue that if the Frank family did not let anybody else stay with them, they might have survived longer but I do not think anybody could live with themselves knowing that somebody they refused to help could be dead or at least in trouble. In conclusion I think that the Frank family were right to allow more people to stay with them. If everybody's life is equal, then you cannot justify allowing yourself to be safe but not anybody else. Also, refusing to help other people against many religions. We need to show kindness to each other to help humanity. An example of this is giving to charity; hundreds of people would be suffering if it wasn't for all of the kind people who give money. This is also an example of agape. I think that everybody should do show love and kindness to each other or the world would be a selfish and mean place. ?? ?? ?? ?? ...read more.