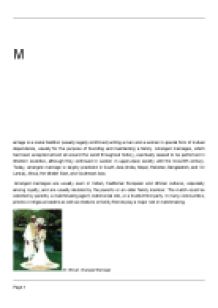 Arranged Marriages- What they really are

﻿________________ M arriage is a social tradition (usually legally confirmed) uniting a man and a woman in special form of mutual dependence, usually for the purpose of founding and maintaining a family. Arranged marriages, which had been accepted almost all around the world throughout history, eventually ceased to be performed in Western societies, although they continued in custom in upper-class society until the mid-20th century. Today, arranged marriage is largely practiced in South Asia (India, Nepal, Pakistan, Bangladesh, and Sri Lanka), Africa, the Middle East, and Southeast Asia. Arranged marriages are usually seen in Indian, traditional European and African cultures, especially among royalty, and are usually decided by the parents or an older family member. The match could be selected by parents, a matchmaking agent, matrimonial site, or a trusted third party. In many communities, priests or religious leaders as well as relatives or family friends play a major role in matchmaking. An African Arranged Marriage Differences between forced marriage and arranged marriage Although matches are made by family or relatives etc., it should not be confused with the idea of forced marriage. Forced marriage is a marriage in which one or both of the parties are married without his or her consent or against his or her will. ...read more.

What do those who are in arranged marriages feel about their relationship? In separate research, Harvard academic Dr Robert Epstein has studied the subject of arranged marriages for eight years, looking at the approaches taken in cultural groups including Indian, Pakistani and Orthodox Jewish. He has interviewed more than 100 couples in arranged marriages to assess their strength of feeling and studied his findings against more than 30 years of research into love in Western and arranged marriages. His work suggests that feelings of love in love matches begin to weaken by as much as a half in 18 months, whereas the love in the arranged marriages tends to grow gradually, surpassing the love in the unarranged marriages at about the five-year mark. The connection felt by those in arranged marriages is said to be around twice as strong. Relationship experts claim this is because arranged matches are carefully considered, with thought going into whether potential partners? families, interests and life goals are compatible. This means they are more likely to commit for life ? and to stick together through rocky patches. Those who marry for love, on the other hand, tend to be blinded by passion and so overlook these crucial details. ...read more.

Matches are made between prospective bride and groom based on benefits to both families and reputation of the bride or groom. The couple consent to the marriage before arrangements are made. The second type, haram, is where the parents have full control over the pairing of the couple; the bride and groom have absolutely no say. Brides are chosen or given away based on the benefit to the family, the girl or mutual agreement between the families. An Islam Marriage In Jewish Haredi communities, many marriages are arranged by a professional match-maker ("shadchan") who receives a "brokerage-fee" for his or her services. The parents may be actively involved in the matchmaking procedure, but the young couple is not forced to marry. The Shidduch is thus a system of arranged introductions rather than arranged marriages. Is it reasonable for people to continue this practise in the 21st century? It is reasonable for people to practise arranged marriages in the 21st century as it is proven that the divorce rate is considerably lower than a love inspired marriage. It also is proven that people in the relationship are happier. However, we must make sure that arranged marriages are not forced marriages and the people that are anticipating an arranged marriage have a say in whether they want to have the marriage or not. Also, we have to make sure that arranged marriages are not happening between children under 18. ________________ Page ...read more.