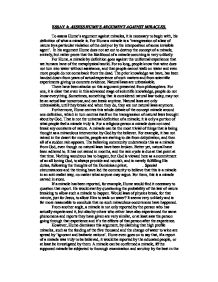 ESSAY 4: ASSESS HUME'S ARGUMENT AGAINST MIRACLES. To assess Hume's argument against miracles, it is necessary to begin with, his definition of what a miracle is. For Hume a miracle is a 'transgression of a law of nature by a particular violation of the deity or by the interposition of some invisible agent'. In his argument Hume does not set out to destroy the concept of a miracle, entirely, but rather prove that the likelihood of a miracle occurring is very unlikely. For Hume, a miracle by definition goes against the uniformal experience that we humans have of the metaphysical world. For so long, people know that wine does not turn into water without assistance, and that people cannot walk on water and even more people do not come back from the dead. The prior knowledge we have, has been handed down from years of actual experience of such matters and from scientific experiments giving us concrete evidence. ...read more.

For example, it has not rained in the desert for months, people are starting to die from dehydration, and then all of a sudden rain appears. The believing community understands this as a miracle from God, even though no natural laws have been broken. Better yet, natural have been adhered to. It has not rained in months, and the rain cycle is due at that point at that time. Nothing wondrous has to happen, but God is viewed here as a commitment of an all loving God, to always provide and nourish, and is merely fulfilling His duties, following the thoughts of the Dominican priest, . Special circumstances and the timing have led the community to believe that this is a miracle in an anti-realist way, no matter what anyone may argue. For them, this is a miracle carved in stone. If a miracle has been reported, for example, Hume would find it necessary to question that report. ...read more.

A miracle can be confirmed a miracle, iff the supposed miracle be subjected to thorough examination and scrutiny by the best in the fields, such as scientists- the people who have nothing to gain and everything to lose. If these people cannot explain the situation, it can be termed as a miracle. Even though this seems like a good argument, it is not. Hume is using an ad hominem argument, because it attacks the person not the actual issue at hand. These do not make good arguments. Just because person A is less intelligible than person B, what that person A has to say does not become less important or less reliable. Several would dispute this stand taken by Hume, some would even say that people should accept testimonies given by the person who has actually experienced this miracle, under the absence of special considerations, seriously, and the sceptical arguments should be rejected. This is the principle of credulity. Additionally, again in the absence of special considerations, believing the experiences of others is reasonable. This is the principle of testimony. ...read more.