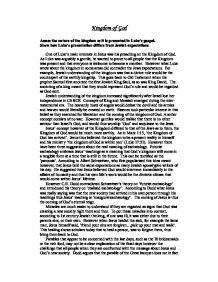 Assess the nature of the kingdom as it is presented in Luke's gospel. Show how Luke's presentation differs from Jewish expectations

Kingdom of God Assess the nature of the kingdom as it is presented in Luke's gospel. Show how Luke's presentation differs from Jewish expectations One of Luke's main interests in Jesus was his preaching on the Kingdom of God. As Luke was arguably a gentile, he wanted to prove to all people that the Kingdom was present and that everyone is welcome to become a member. However what Luke wrote about the kingdom in some areas did contradict the Jews expectations. For example, Jewish understanding of the kingdom was that a divine rule would be the counterpart of the earthly kingship. This goes back to Old Testament when the prophet Samuel first anointed the first Jewish King Saul, as so was King David. The anointing of a king meant that they would represent God's rule and would be regarded as God-sent. Jewish understanding of the kingdom increased significantly after Israel lost her independence in C6 BCE. Concepts of King and Messiah emerged during the inter-testamental era. The heavenly hosts of angels would defeat the devil and his armies and heaven would literally be created on earth. Essenes took particular interest in this belief as they searched for liberation and the coming of the kingdom of God. Another concept consists of no war. However gentiles would realise that there is no other saviour than Israel's God, and would thus worship 'God' and acquiesce to the Jews. ...read more.

When Jesus spoke about the Kingdom he mentioned in the Lords prayer 'Father...Thy kingdom come'. Jesus uses the word Abba as if talking to an earthly father. This becomes much more personal and develops a much more loving relationship in comparison to that of the Old Testament, where all Jews feared a 'jealous' God. The word Abba indicates the uniqueness of the relationship between Jesus and his Father. Jesus saw the Kingdom of God as a New Israel, just as all first century Jews of his believed. Jesus taught that God's rule requires realm in which to work. He speaks of men entering or being 'cast out' of the kingdom. Parables such as the mustard seed with its reference to birds nestling in its branches shows that Jesus has the gathering of a whole society in mind, or it could be described that if anyone has a small amount of faith, it will grow and influence others, just as the disciples preached and converted many to Christianity and those who died in Jesus' name also influence others and strengthened their faith. Jesus also speaks of himself as a shepherd gathering his flock. In order to put his beliefs into practice however, Jesus had to ordain others to carry the Kerygma far and wide after his death and resurrection as prophesied in Luke 24:47-48, '...repentance and forgiveness of sins will be preached in his name to all nations...you are witnesses of these things...I am going to send you what God has promised'. ...read more.

It has been argued that the fire of Rome was arguably the beginning of the end as all Christians were persecuted, (Luke21:12) '...but before all this they must first lay hands on you and persecute you'. The destruction of the Temple was also predicted, thus many people perceived the end of days were near. In Paul's writings, he writes with a sense of urgency and says 'do not marry, or sin for the end of days are near, be ready!' However many Christians today believe that the end of days are still to come, which both Jews and Christians alike await. In conclusion, Jewish understanding of the Kingdom of God slightly differs to that of Jesus' teachings. Jews expected an earthly king to come and liberate them from the occupation of the Romans, as Jesus entered Jerusalem, they expected him to ride on a horse with armament as a 'fighting' leader, on the contrary Jesus was humble and instead rode on a donkey. In Luke's gospel as well as the other gospel writers, the Kingdom is portrayed as a spiritual kingdom for all people united as one. Jewish leaders of the day took this teaching as an insult to the Jewish nation as they had been waiting centuries to be set free and yet they didn't get their earthly response. However one agreement between Christians and Jews alike, is that they still await the Judgement Day in earnest and the coming of Christ in order to consummate the kingdom. ...read more.