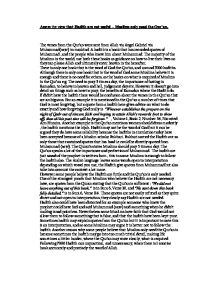 Assess the view that Hadith are not useful &quot; Muslims only need the Qur(TM)an.

Another example is the Qur'an mentions women should dress modestly , the hadith mentions the hijab. Hadith may not be the word of God but it can be argued they do have some reliability because the hadiths in circulation today have been accepted because of a Muslim scholar Bukhari. Bukhari sorted the Hadith out so only those that contained quotes that has isnad i.e could be directly quoted from Muhammad (saw). The Quran's states Muslims should pray 5 times a day .The Qur'an speaks a lot of the importance and perfection of Muhammad. The hadith are just sunnah of the prophet in written form , this to some Muslims is enough to follow the hadith also. The Arabic language leaves some words open to interpretation depending on which vowel you use, the Hadith give quotes from Muhammad but also take into account the context a lot more. ...read more.

Another reason why some people believe that Muslins only need the Qur'an is because sometimes the hadith may go into too much trivial detail, making life sometimes a littler harder, where the Qur'an may state clearly, what is required. Following 7000 Hadith can unpractical, and unnecessary, when there is 1 concise book accurately and precisely the word of Allah. In conclusion some may view the hadith as necessary because it sometimes goes in detail where the Qur'an does not , may give extra useful guidance to Muslims and allow them to learn more about Muhammad's way of life. But on the other hand , hadith may add to any confusion present, and may even contradict the Qur'an , and also perhaps lessen the authority of the Qur'an when the Qur'an explicitly says it is a detailed book and easy to understand. ...read more.