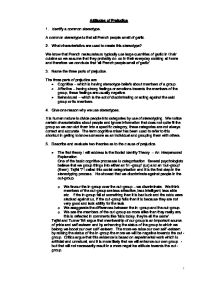 Attitudes of Prejudice 1. Identify a common stereotype. A common stereotype is that all French people smell of garlic. 2. What characteristics are used to create this stereotype? We know that French restaurateurs typically use large quantities of garlic in their cuisine so we assume that they probably do so in their everyday cooking at home and therefore we conclude that 'all French people smell of garlic'. 3. Name the three parts of prejudice. The three parts of prejudice are: * Cognitive - which is having stereotype beliefs about members of a group. * Affective - having strong feelings or emotions towards the members of the group, these feelings are usually negative. * Behavioural - which is the act of discriminating or acting against the said group or its members. 4. Give one reason why we use stereotypes. It is human nature to divide people into categories by use of stereotyping. We notice certain characteristics about people and ignore information that does not quite fit the group so we can slot them into a specific category, these categories are not always correct and accurate. ...read more.

Critics argue that this evidence is based on experimental work which is artificial and unnatural, and it is more likely that we will enhance our own group -but that will not necessarily result in a more negative attitude towards the out-group. * The next theory I will look at is Competition, which is an Inter-group Explanation. At an inter-group level prejudice has been explained as being due to competition which exists between various groups in society. These may be political, religious or economical competition, and is at the highest level of intensity when resources are limited. E.g. when jobs are scarce there may be an increase in prejudice against the minority groups. Sherif '61 carried out a field experiment to study the role of competition and co-operation in inter-group relations. Observations of the behaviour of 12 year old boys were made when they were attending a summer camp in America. The experiment was of a very small group of just 22 boys from similar backgrounds and they were all white Americans. ...read more.

Another study was carried out on a group of very prejudice white and black people which arranged for them to work together on a series of joint tasks. The results of these were mixed: 40% less prejudiced, 40% had not changed and 20% were more prejudiced. Status has also been looked at and research shows that higher status members of groups tend to initiate things, they are listened to and views are more likely to be followed. To reduce prejudice through joint tasks, those who are the victims of prejudice must be of higher status in order to change the attitudes of those who are prejudiced. I think a number of employers now use the 'team-building' exercises and weekends as ways to overcome potential prejudices by giving them opportunities to get to know participants who may in work be of a lower status but in this 'artificial' situation each member plays their own important role to achieve a goal. This will hopefully make people be seen as individuals and give an opportunity for their strengths to shine through, rather than them being just someone from 'X' department. ?? ?? ?? ?? 1 ...read more.