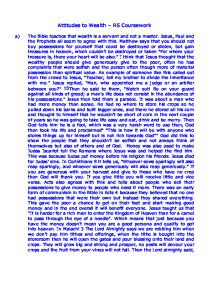 Attitudes to Wealth - RS Coursework a) The Bible teaches that wealth is a servant and not a master. Jesus, Paul and the Prophets all seem to agree with this. Matthew says that you should not buy possessions for yourself that could be destroyed or stolen, but gain treasures in heaven, which couldn't be destroyed or taken "For where your treasure is, there your heart will be also." I think that Jesus thought that the wealthy people should give generously give to the poor, often he has complaints that were selfish and the person often though more of material possession than spiritual value. An example of someone like this called out from the crowd to Jesus, "Teacher, tell my brother to divide the inheritance with me." Jesus replied, "Man, who appointed me a judge or an arbiter between you?" 15Then he said to them, "Watch out! Be on your guard against all kinds of greed; a man's life does not consist in the abundance of his possessions." Jesus then told them a parable. It was about a man who had more money than sense. He had no where to store his crops so he pulled down his barns and built bigger ones, and there he stored all ...read more.

b) I think that Christians today believe that money is good and this can be proved in a number of ways. Comic Relief raises money for the poor which can help them build houses and maybe even churches to worship at, Comic Relief raised �42 million this year for the homeless in England and Africa which is very good. Hilaire Belloc was a Catholic writer in the late 1800's and the early 1900's. Born in England he grew up in France and then became a Member of Parliament. He wrote poems, essays, novels and was a historian. Hilaire very generous he said "Money gives me pleasure all of the time" this is because when he donated to charities he believed that he was helping someone in need. Christians show this attitude today when they donate to good causes and charities they good about themselves for helping someone get back on there feet and start making money to buy food for themselves and become healthy and raise children safely. The Beatles said that "Money can't buy me love" this means that no matter how much money you have you can't buy peoples love and affection or you can't buy the heart of God. ...read more.

Charities like Comic Relief are very good and the more money put into it the better the world will be. Money can also be used to erase third world debt, which is good as well. The Beatles say, "Money can't buy me love" which is true because love is much better than money and money is not love. But I can see the other side of the argument; money could be neutral rather than evil. Money can be evil and very good, it can help people in need and it can corrupt and influence people. Although giving to charities is good maybe money can't buy Hilaire Belloc happiness all of the time because money is a servant not a master. I conclude that money should be use wisely to serve God and it doesn't matter how much you have it just matters that you care. "As he looked up, Jesus saw the rich putting their gifts into the temple treasury. He also saw a poor widow put in two very small copper coins." Then Jesus said that the woman would be more rewarded than the rich men as she has poverty to live on and they just give it out of their wealth trying to buy a place in heaven. ...read more.