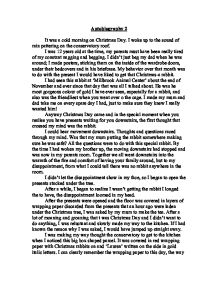 Autobiography - It was a cold morning on Christmas Day. I woke up to the sound of rain pattering on the conservatory roof.

Autobiography 2 It was a cold morning on Christmas Day. I woke up to the sound of rain pattering on the conservatory roof. I was 12 years old at the time, my parents must have been really tired of my constant nagging and begging. I didn't just beg my dad when he was around; I made posters, sticking them on the inside of the wardrobe doors, under their bedcovers and in his briefcase. My behavior over that month was to do with the present I would have liked to get that Christmas-a rabbit. I had seen this rabbit at 'Millbrook Animal Center' about the end of November and ever since that day that was all I talked about. ...read more.

Together we all went downstairs into the warmth of the fire and comfort of having your family around, but to my disappointment, from what I could tell there was no rabbit anywhere in the room. I didn't let the disappointment show in my face, so I began to open the presents stacked under the tree. After a while, I began to realize I wasn't getting the rabbit I longed the to have, the disappointment loomed in my head. After the presents were opened and the floor was covered in layers of wrapping paper discarded from the presents that an hour ago were laden under the Christmas tree, I was asked by my mum to make the tea. ...read more.

Suddenly I realized that I couldn't stand their all day looking t the wrapping paper and how the objects moved on it, I should look inside and see what is in their for me. I gasped with the shock and excitement. I took a few small steps closer and opened the flap covering half the box. And inside the box was he golden rabbit I hade been dreaming about. Tears started welling up in my eyes and a couple escaped and started rolling down my face n a mixture of shock and delight. Within a split second I picked up the golden ball and named him 'Sandy', a name that had been stuck in the back of my mind ever since the rainy day I saw him in November. This cold December morning that started with happiness but then led to disappointment eventually ended up back in happiness and delight. ...read more.