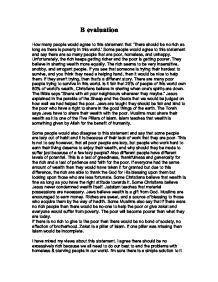 B evaluation How many people would agree to this statement that 'There should be no rich as long as there is poverty in this world.' Some people would agree to this statement and say there are so many people that are poor, homeless, and unhappy. Unfortunately, the rich keeps getting richer and the poor is getting poorer. They believe in sharing wealth more equally. The rich seems to be very insensitive, snobby, and arrogant people. If you see that someone is trying their hardest to survive, and you think they need a helping hand, then it would be nice to help them. If they aren't trying, then that's a different story. There are many poor people trying to survive in this world. Is it fair that 25% of people of this world own 80% of world's wealth, Christians believe in sharing when one's spirits are down. ...read more.

Also different people have different levels of potential. This is a test of greediness, thankfulness and generosity for the rich and a test of patience and faith for the poor. If everyone had the same amount of wealth then they would have taken it for granted but due to this difference, the rich are able to thank the God for His blessing upon them but looking upon those who are less fortunate. Some Christians believe that wealth is fine as long as you have the right attitude towards it. Some Christians believe Jesus never condemned wealth itself. Judaism teaches that material possessions are necessary. Jews believe wealth is a gift from God. Muslims are encouraged to earn money. Riches are sweet, and a source of blessing to those who acquire them by the way of hadith. Some Muslims also say that if there were no rich people then there would be no-one to help the poor or give zakat and everyone would suffer from poverty. ...read more.

Bill wakes up one day and has lost his home, family and his job. Is it Mike's responsibility to take care of Bill? NO, but he may out of the kindness of his heart help Bill out or give him a job. Bill has to be willing himself to help make his life better. However I also disagree because, should some have little or nothing while others are permitted to be as selfish as they want and wallow in excesses? Such imbalance is tolerated only by the selfish, the uncaring and ignorant who hoard wealth like the gluttons they are. I also believe that Extreme individual wealth is often the cause of widespread poverty. Slave wages that barely feed and clothe workers bring amazing profits to those willing to use others. They would say that they are doing nothing wrong. They are following the laws (more or less). Personally I think there should be a limit on wealth, but it doesn't matter what I think. This will continue until God puts an end to it. ...read more.