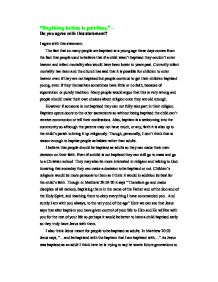 Baptising babies is pointless, Do you agree with this statement?

"Baptising babies is pointless," - Do you agree with this statement? I agree with this statement. The fact that so many people are baptised at a young age these days comes from the fact that people used to believe that if a child wasn't baptised they couldn't enter heaven and infant mortality also would have been lower in years past. Currently infant mortality has risen and the church has said that it is possible for children to enter heaven even if they are not baptised but people continue to get their children baptised young, even if they themselves sometimes have little or no faith, because of superstition or purely tradition. Many people would argue that this is very wrong and people should make their own choices about religion once they are old enough. ...read more.

They may also be more interested in religion and talking to God knowing that someday they can make a decision to be baptised or not. Children's religions would be more personal to them so I think it would in addition be best for the child's faith. Though in Matthew 28:19-20 it says "Therefore go and make disciples of all nations, baptizing them in the name of the Father and of the Son and of the Holy Spirit, and teaching them to obey everything I have commanded you. And surely I am with you always, to the very end of the age" Here we can see that Jesus says that after baptism you have given control of your life to Him and He will be with you for the rest of your life so perhaps it would be better to have a child baptised early so they truly have Jesus with them. ...read more.

They can still take part in a Christian life without receiving the sacraments until an older age. In Acts 16:33 it says, "And immediately he and all his family were baptized" Here a whole family, surely including children were baptised. This shows that, just after Jesus' time, not only adults were baptised but I still don't believe that makes infant baptism right as it was not Jesus himself that baptised the family in this case. In conclusion I believe it would be better to baptise people older. I think children should be brought up with preparation for the choice they get to make. This way they would feel their faith is more personal and they would also be more interested in faith knowing that is truly theirs to have or not. By Cora Degan 12A ...read more.