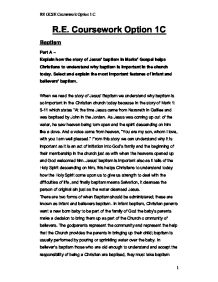 Explain how the story of Jesus’ baptism in Marks’ Gospel helps Christians to understand why baptism is important in the church today. Select and explain the most important features of infant and believers’ baptism.

When we read the story of Jesus’ Baptism we understand why baptism is so important in the Christian church today because in the story of Mark 1: 9-11 which states “At the time Jesus came from Nazareth in Galilee and was baptised by John in the Jordan. As Jesus was coming up out of the water, he saw heaven being torn open and the spirit descending on him like a dove. And a voice came from heaven, “You are my son, whom I love, with you I am well pleased.” From this story we can understand why it is important as it is an act of initiation into God’s family and the beginning of their membership in the church just as with when the heavens opened up and God welcomed him. Jesus’ baptism is important also as it tells of the Holy Spirit descending on him, this helps Christians to understand today how the Holy Spirit come upon us to give us strength to deal with the difficulties of life, and finally baptism means Salvation, it cleanses the person of original sin just as the water cleansed Jesus.

There are two forms of when Baptism should be administered; these are known as Infant and believers baptism. In infant baptism, Christian parents want a new born baby to be part of the family of God the baby’s parents make a decision to bring them up as part of the Church community of believers. The godparents represent the community and represent the help that the Church provides the parents in bringing up their child; baptism is usually performed by pouring or sprinkling water over the baby. In believer’s baptism those who are old enough to understand and accept the responsibility of being a Christian are baptised, they must take baptism very seriously and confess their faith. Those who wish to be baptised will perform the ceremony in a river or a place were the person can be fully immersed in the water (to re-enact Jesus’ baptism), they cannot receive any other sacrament of initiation until they have been baptised.

Explain how being baptised might affect the behaviour, lifestyle and decision making of Christians believers today.

Being baptised defines a person for the rest of their life, it means that that person is now part of a Christian community and family which has swore to teach the person baptized the churches values and cherished beliefs to make the person live a generous pro-life existence.

First of all being baptised will give people a better chance of becoming a Christian believer as they were brought up around it, this will affect their lifestyle as they have responsibilities like attending Church Service every week and other days, going to confession, receiving the Eucharist and celebrating Christian holidays, they would pray often and might also support a Christian Charity as they are brought up be generous to the poor.

As being baptised means being brought up around Christians it would affect that person’s behaviour, perhaps by being more tolerant towards people of different race, gender or sexual orientation, it might affect behaviour by being more sympathetic towards the poor and those less of than them, this would result in being charitable, they might be more capable of forgiveness than if they hadn’t been brought up Christian because they would’ve asked for forgiveness, they might also show their faith in home and work by the way they act, speak, decision-make and their communication with other people.

Baptism would affect Christian believer’s decisions as they were taught the moral values of the church, for example, they would be pro-life and so against abortion and pro-choice, they would be against sex and living together before marriage, adultery, divorce and remarriage. They would go against decisions like contraception, third world debt, and violence including war (pacifism), discrimination, oppression and capital punishment.

“Only those who want to be Christians, or their children, should be baptised, because Churches should not be used for purely social purposes.”

I agree with the argument that “Only those who want to be Christians, or their children, should be baptised, because Churches should not be used for purely social purposes” and referring to Christianity I can support this, today baptism is mostly identified with Christianity, it is sacrament of initiation into the church were they are now part of that Christian family of God and member of the church but most importantly it is the symbolism of the new union with Jesus Christ, therefore anyone who isn’t a Christian trying to get a baptism is contradicting this and consciously lying when they profess their beliefs by reciting the creed on the baby’s behalf. Some people would think baptism is just the celebration of the child being born, the act of baptism has little to do with new birth, and it is the ceremony of washing away original sin and the new membership with God, it would be thought to be very selfish to ‘use’ the Church sacrament of baptism as an excuse for a celebration of new born life. On the other hand some people would think they have a right to be baptized or baptize a child as it so common to do so it wouldn’t be right on the child, for example if a child wasn’t baptised then they mightn’t get into high quality Roman Catholic School, also others might feel it not the Childs fault it not have a Christian family so why should you punish the child by refusing it salvation from original sin.