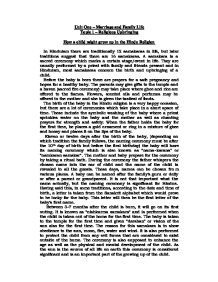 Being brought up in hinduism

Unit One - Marriage and Family Life Topic 1 - Religious Upbringing How a child might grow up in the Hindu Religion In Hinduism there are traditionally 12 samskaras in life, but later traditions suggest that there are 16 samskaras. A samskara is a sacred ceremony which marks a certain stage/event in life. They are usually performed by a priest with family and friends present and in Hinduism, most samskaras concern the birth and upbringing of a child. Before the baby is born there are prayers for a safe pregnancy and hopes for a healthy baby. The parents may give gifts to the temple and a havan (sacred fire ceremony) may take place where ghee and rice are offered to the flames. Flowers, scented oils and perfumes may be offered to the mother and she is given the tastiest of foods. ...read more.

These days, names can be chosen from various places. A baby can be named after the family's guru or deity or after a parent or grandparent. It is not that important what the name actually, but the naming ceremony is significant for Hindus. Having said this, in some traditions, according to the date and time of birth, a letter is taken from the Sanskrit alphabet which would prove to be lucky for the baby. This letter will then be the first letter of the baby's first name. Between 3-7 months after the child is born, it will go on its first outing. It is known as "nishkarma samskara" and is performed when the child is taken out of the home for the first time. The baby is taken to the temple for the first time and given "darshan" or vision of the sun also for the first time. ...read more.

The ceremony also acts a sacrifice to the Lord as the child is sacrificing its hair and possibly its beauty. This ceremony is performed at the child's home. The entire head is shaven apart from a few tufts of hair which are left on the crown. The number of tufts left depend on the family tradition, but the reason why tufts are left on the crown (area towards the back of the head) is because an artery joins a critical nerve juncture and damage to this area could be fatal. Therefore some hair is needed to protect this area. Some Hindus also mark the first time the baby eats solid food as significant. A ceremony is performed where this happens and it is similar to all the other ceremonies a baby has after its birth. It usually takes place before the head shaving ceremony. ...read more.