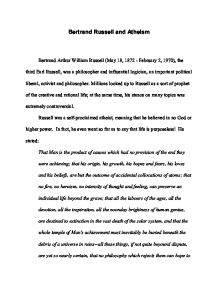 Bertrand Russell and Atheism Bertrand Arthur William Russell (May 18, 1872 - February 2, 1970), the third Earl Russell, was a philosopher and influential logician, an important political liberal, activist and philosopher. Millions looked up to Russell as a sort of prophet of the creative and rational life; at the same time, his stance on many topics was extremely controversial. Russell was a self-proclaimed atheist, meaning that he believed in no God or higher power. In fact, he even went so far as to say that life is purposeless! He stated: That Man is the product of causes which had no prevision of the end they were achieving; that his origin, his growth, his hopes and fears, his loves and his beliefs, are but the outcome of accidental collocations of atoms; that no fire, no heroism, no intensity of thought and feeling, can preserve an individual life beyond the grave; that all the labours of the ages, all the devotion, all the inspiration, all the noonday brightness of human genius, are destined to extinction in the vast death of the solar system, and that the whole temple of Man's achievement must inevitably be buried beneath the debris of a universe in ruins--all these things, if not quite beyound dispute, are yet so nearly certain, that no philosophy which rejects them can hope to stand. ...read more.

Both approaches are flawed. I don't doubt that people have faith, but I see no good reason for thinking that having faith can lead to some truth about reality. One cannot rationally argue that faith leads to truth; one can only have faith that faith leads to truth. But again, the claim that having faith that faith leads to truth leads to truth can only be supported through faith. Thus there is no good reason to think faith leads to truth. There are many other arguments against atheism. The "cosmological" argument (in one rendition) claims (1) that everything must have a cause, but (2) an infinite chain of causes is impossible, therefore (3) there must be a First Cause: God. However, this argument contradicts itself. If everything must have a cause, so must the First Cause. The argument from religious experience claims that, because people have similar religious experiences, there must be some truth behind them. But UFO abductees also tell strikingly similar stories - must we believe them, too? The moral argument claims that without God, there would be no absolute moral standards. I disagree. I believe that everyone has their own moral code that they follow, irregardless of a God or religion. ...read more.

There are countless religions, and churches. Even those who fall under the same religion get split because they tend to believe one thing that another sector does not. How many 'holy wars' have been fought in the name of religion and God? Pain, suffering, and dying are not holy to me. I also find it repulsive that Saddam Hussein has called our war a holy war, or jihad, and an attack on their religion. He has also called on the people to defend their beliefs by giving their lives and causing countless deaths through suicide missions, similar to the attack on the World Trade Centers. For me, my belief does not harm anyone. I do not look down on others who may believe in another religion. I would not call on anyone to 'defend' science or my belief. Who knows, I could very well be wrong and will be judged accordingly. However, without better evidence or arguments, then, I believe there is no good reason to succumb to the positive belief, "God exists." On his 90th birthday, the atheist philosopher Bertrand Russell was (supposedly) asked what he would say if he died, went to heaven, and met God. Russell's eyes lit up, and he replied, "Why, I should say, 'God, you gave us insufficient evidence. ...read more.