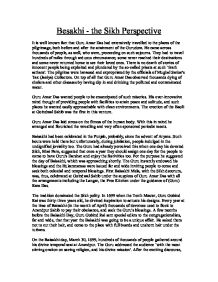 Besakhi - the Sikh Perspective It is well known fact that Guru Amar Das had extensively travelled to the places of the pilgrimage, both before and after the attainment of the Gurudom. He came across thousands of people, as well, who were, proceeding on such sojourns. They had to travel hundreds of miles through arduous circumstance; some never reached their destinations and some never returned home to see their loved ones. There is no dearth of stories of innocent people being exploited and plundered by the so-called priests at such `tirath asthans'. The pilgrims were harassed and expropriated by the officials of Mughal Sarkar's Tax (Jaziya) Collectors. On top of all that Guru Amar Das observed thousands dying of cholera and other diseases by having dip in and drinking the polluted and contaminated water. Guru Amar Das wanted people to be emancipated of such miseries. His ever-innovative mind thought of providing people with facilities to attain peace and solitude, and such places he wanted easily approachable with clean environments. ...read more.

Every year at the time of Baisakhi (in the month of April) thousands of devotees used to flock to Anandpur Sahib to pay their obeisance, and seek the Guru's blessings. A few months before the Baisakhi Day, Guru Gobind Rai sent special edicts to the congregationalists, far and wide, that that year the Baisakhi was going to be a unique affair. He asked them not to cut their hair, and come to the place with full beards and unshorn hair under the turbans. On the Baisakhi day, March 30, 1699, hundreds of thousands of people gathered around his divine temporal seat at Anandpur. The Guru addressed the audience `with the most stirring oration on saving religion, and his divine mission'. After the exciting discourse, he flashed his unsheathed sword, and said that every great deed preceded by equally great sacrifice, and he demanded one head for oblation. After `some trepidation one person offered' himself. The Guru took him inside a tent. A little later he reappeared with the sword dripping with blood, and asked for another head. ...read more.

At the same time, to give the Khalsa a unique, indisputable, and distinct identity, he prescribed five symbols. These symbols are popularly known as Five Ks; Kesh--unshorn hair, Kangha--the comb, Karra--the iron bangle, Kirpan--the sword, and Kachehra--the underwear. `These Five Ks would be the emblems of purity and courage,' and identifiable among thousands of people; a Sikh could never hide under cowardice. The political tyranny was not the only circumstance that was degenerating the people's moral. The discriminatory class distinction, promoted by Brahmins and Mullahs, was equally responsible for the degradation. The Guru wanted to eliminate the anomalies caused by the caste system. The constitution of the Panj Pyare was the living examples of his dream; both the high and low castes were amalgamated into one. Among those Panj Pyares, there was one Khatri--shopkeeper, one Jat--agriculturist, one Chhimba--washer-man, one Kahar--water-carrier, and a Nai--barber. He designated the surname of Singh--lion to every Sikh and himself became Guru Gobind Singh. With an indiscreet identity Guru Gobind Singh put all the Sikhs on one platform of Courage, Sacrifice, and Equality. Thus the Sikh Religion was placed under the protection of SIKH NATION and endowed the distinction of KHALSA PANTH on Baisakhi day, March 30, 1699. ...read more.