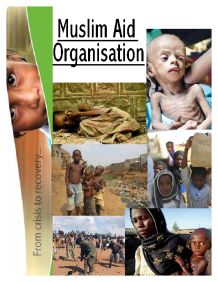 Contents Page Page 1 Title page Page 2 Context page, introduction, and AO1 Page 3 AO1 Page 4 AO1 Page 5 AO2 Page 6 AO2 Page 7 AO2 and AO3 Page 8 AO3 Page 9 Conclusion and Bibliography Introduction Muslim Aid organizations help millions of helpless children, adults, and the elderly all over the world. Daily they change and save many lives, I chose to look in depth at the work they do, and the way they do it and how their ethics affect the way they work. I feel that I do not fully grasp the feeling of a Muslim what he or she feels when they give their Zakat, Zakat is the money that they have to pay towards a charity, or people less fortunate then themselves. By the end of my study in to the Muslim Aid Organizations I hope to understand more about their work, their religious views towards charity, and what makes Muslims feel so strongly about giving their Zakat. AO1- Name and Describe the work of a Muslim Aid Organization. There are many different organizations all around the world which work towards improving the lives of thousands people around the world who are affected by poverty, war, and disasters. Muslim Aid is the organization that I studied, mainly because I thought that it did a lot of work in a wide variety of areas, ranging from Education, Security and Health, to Orphan Care. '...And whoever saves a life of one, it shall be as if he has saved the life of all mankind' (Qu'ran 5:32). This is the ethos that Muslim Aid operates by; it means that they value each and every individual person. ...read more.

The giving of Zakah started in al-Madinah to look after the widows and the orphans, wealth is a gift from Allah and Muslims believe that it should be shared. They share their wealth happily to show the unity and the brotherhood of the Muslim Umma (community). 'Spend your wealth for the cause of Allah, and do not be cast to ruin by your own hands; do good! Lo! Allah loves the generous.' (Surah 2:195) Muslims give money to purify themselves, it helps them to fight greed, jealously, hatred and envy; it helps them to grow spiritually,- however they cannot grow if they do not have the right intention when they give their Zakah. If they give their charity away to be acknowledged by others, or admired due to their generosity it would show a lack of their true faith in their God Allah, 'for the giver has forgotten that Allah knows every motive.'(6) The Zakah that is usually given is normally given anonymously; the Muslim Umma would not want to draw attention to themselves, as it could encourage them to seek attention and possible power. Muslims everywhere share their wealth with 'the poor, the needy, the debtor,' (5) and 'the prisoner,' (5), but the Zakah that they send out is only sent to Muslims. Muslims believe strongly that Allah is compassionate, and they believe that they too should be compassionate. Their compassion is shown in the Zakah that they give. 'He is not a believer who eats his fill whilst his neighbour remains hungry by his side', (Hadith). Some Muslims choose to give more then the compulsory 2.5% of their annual income, when they chose to give something else it would be by personal ...read more.

So in actual fact as much as a charity could provide a community with a lifetime of knowledge and food, the disease that creates all of the problems will carry on because nobody is there that can heal the greed. I think that charity is a short term solution, however the charities today are more advanced and take a lot of care in to providing someone with enough knowledge and security that they will be able to look after themselves for ever, they would teach their children their knew found skills, and provide their family with food and a good home for generations. Nevertheless if a disaster strikes then the people in that area, are back in the cyclical circle of poverty, unable to escape or repair the problem, they could lose their homes and not have the materials to re-build their houses, their land could have been destroyed and their food source diminished. These devastated people would be in the same place that they were before and have to wait for the charities to come and re-build their lives for them again. Conclusion I have learnt a lot from this project, I have discovered a lot more about Muslims views toward charity, and how it affects their religion. The ideas that I had before, that I struggled to understand, I now grasp. Now that I have completed this project I can see not only the values of charity, but the generosity in every Muslims life, and the way he or she feels towards the people in the world who are less fortunate then themselves and are in dire need. If I didn't complete this project, I know that I would still have been very ignorant towards charity and Muslims views of charity. ...read more.