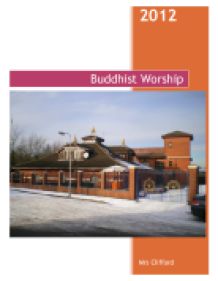 Buddhist Temples Buddhist Temples are found all over the world. They are built in large numbers in China, Japan and all over Asia. They comprise monks and nuns who live a rather extreme lifestyle. They live on donations by the people living near the temple. A conventional temple will have a set of buildings. Each building has its own purpose. These are: Buddhist Temples Symbolise 5 things: 1. Fire 2. Water 3. Earth-symbolised by the square base. 4. Water 5. Wisdom Sadafha Gatarma: Sadafah Gatarma is often referred to as Buddha. He was the founder of Buddhism. Sadafah was a prince in Lumbini(Nepal). He was the prince of the Shakya Clans village of Kapilavatthu/kapilvastu (in the foothills of the Himalayas). Sadafah married at the age of 29 and had a wife and a child. However when he discovered the difference between a life of aristocratic luxury and life of suffering he left his family, wealth, power and inheritance. ...read more.

This is taken from one of the roots of Buddhism the whole idea that peace is the thing that all humans should possess and this is what this statue teaches Buddhists. Buddha has his right hand out and his left hand down beside him. However, some people do argue that this shows him to be resisting against something. And the counter argument for that is that he is resisting against violence and injustice. I feel that this is a very valuable lesson that this statue shows us and that if all of us keep this minor thing in mind the world would be a better place. My religion-Islam- also teaches humanity this. The Bahumisparsha Mudra This statue shows Sadafah meditating under the Bodhi tree. It is symbolically expressing Buddha's solitary nature in meditation. The whole idea that he is superior to us human beings is acceptable to Buddhists to some extent. They see him as a leader or a protagonist of Buddhism however they do not except him as a god. ...read more.

Statues of Buddha There are several statues of Buddha which represent several different things. These are the names of a few statues: Dyana Mudra, Abhaya Mudra, Bahumispharsha Mudra, Darmachakra Buddha and laughing Buddha. Incense The combination of Fire and fragrance is a lovely one. Incense is often put in shrines in order to make meditating easier. Please note that this is not only used in Buddhism however it is found in several other religions and cultures. Flowers Flowers are placed into Buddhist shrines mainly for aromatic purposes and also because Buddhism is about peace and having flowers shows that they are at peace with nature. Buddhists would tend to use lotus flowers seeing as they represent tranquillity. Pictures of Saints and Holy men Having pictures of religious Buddhists is mainly for respect. Also it could be inspiring to look at how devoted people were to their religions. Prayer Wheel Buddhists are given an instrument that has a scroll wrapped round inside it. This was so people that were illiterate could practice Buddhism with no trouble. ...read more.