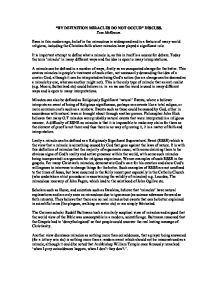 "BY DEFINITION MIRACLES DO NOT OCCUR" DISCUSS. Tom McKeown. Even in this modern age, belief in the miraculous is widespread and is a feature of many world religions, including the Christian faith where miracles have played a significant role. It is important attempt to define what a miracle is, as this in itself is a source for debate. Today the term 'miracle' in many different ways and the idea is open to many interpretations. A miracle can be defined in a number of ways, firstly as an unexpected change for the better. This centres miracles in people's treatment of each other, not necessarily demanding the idea of a creator God, although it can be interpreted as being God's action (here a change can be deemed as a miracle by one, whereas another might not). This is the only type of miracle that an anti-realist (e.g. Moore, Sutherland etc) could believe in. in as we use the word is used in many different ways and is open to many interpretations. Miracles can also be defined as Religiously Significant 'natural' Events, where a believer interprets an event of being of Religious significance, perhaps rare events like a total eclipse, or more common one's such as a rainbow. Events such as these could be caused by God, either in accordance with natural laws or brought about through another person. ...read more.

is widely seen as being his strongest argument against miracles. Here Hume reasons that it would be impossible for us to prove an event was miraculous because any such event would have to outweigh all of humanity's accumulated experience (the experiences of millions of people over thousands of years). This can be criticised as a circular argument, which does not actually say that miracles do not happen just that Hume can't believe it. The first of Hume's a posteriori (psychological) arguments, the argument from insufficient witness, argued that to believe in miracles it was necessary for there to be, a substantial number of witnesses, witnesses of higher credibility, of good sense, education, integrity etc. Hume reasoned that there was not a single miracle recorded in history by such witnesses as these. In Hume's second psychological argument, the argument from ignorance, Hume ascertained that miracles usually came from "ignorant and barbarous nations" and claimed this formed a "strong presumption against all supernatural and miraculous relations". Hume's third psychological argument is that people are drawn towards the sensational, noting peoples tendency to exaggerate and that many had a desire to believe. Hume claimed that witnesses if miracles were guilty of wish fulfilment (in this subject his ideas anticipated those of Freud and Marx). ...read more.

Secondly, many recognise false prophets and lastly, recognition of miracles does not necessarily lead to truth claims (Jesus played down their significance in his ministry). Perhaps the main invalidating argument to Hume's challenge is John Hick's reasoning that 'all routes lead to God', that miracles are caused by just one God that all religions lead up to. There are several other arguments in defence of miracles. One such defence being that if there is reasonable evidence the existence of an omnipotent Christian God that governs natural laws, one such definition of a miracle, then a logical argument can be made for belief in miracles (although this opens up the question whether such a God does exist. Furthermore, if as Thomas Aquinas suggested, miracles might occur within the system of natural activity, then how are we to tell when a miracle has occurred. In addition to this it should be pointed out that scientific explanations do not rule out theological explanations. I believe that the statement "By definition miracles do not occur" is simplistic and problematic for many reasons, as there is great difficulty in actually defining what a miracle is and the arguments that attempt to prove this, such as Hume's a priori argument, are deeply flawed and open to much criticism. Thus I find it is impossible to dismiss Miracles as false by definition, but believe that the evidence must be looked at, "a good scientist looks at the evidence" (Polkinghorne). ...read more.