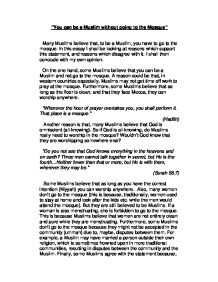 Can you be a muslim without going to the mosque? Discuss

"You can be a Muslim without going to the Mosque" Many Muslims believe that, to be a Muslim, you have to go to the mosque. In this essay I shall be looking at reasons which support this statement, and reasons which disagree with it. I shall then conclude with my own opinion. On the one hand, some Muslims believe that you can be a Muslim and not go to the mosque. A reason could be that, in western countries especially, Muslims may not get time off work to pray at the mosque. Furthermore, some Muslims believe that as long as the floor is clean, and that they face Mecca, they can worship anywhere. "Wherever the hour of prayer overtakes you, you shall perform it. That place is a mosque." (Hadith) ...read more.

while the men would attend the mosque). But they are still believed to be Muslims. If a woman is also menstruating, she is forbidden to go to the mosque. This is because Muslims believe that women are not entirely clean and pure while they are menstruating. Furthermore, some Muslims don't go to the mosque because they might not be accepted in the community (ummah) due to, maybe, disputes between them. For example, a Muslim may have married a person outside their own religion, which is sometimes frowned upon in more traditional communities, resulting in disputes between the community and the Muslim. Finally, some Muslims agree with the statement because, praying in the mosque is not mentioned in the Qur'an, and was not mentioned when Muhammad (pbuh) ...read more.

As Salah is one of Arkhan, it is fard. Also, many Muslims believe that they should follow the Sunnah (the example of Muhammad (pbuh)). As Muhammad (pbuh) went to the mosque, all Muslims should aswell. A final reason could be that Muslims should give Zakat ul Fit'r, which is also fard. Most Muslims give this at their local mosque. In conclusion, I think that you can be a Muslim and not go to the mosque. This is because Muslims living in non-muslim countries may not get time off work to visit the mosque to pray. Also because some Muslims may wish to worship at home with their families, rather than praying in a mosque. And finally, as a mosque was never mentioned when Muhammad (pbuh) was told to worship five times a day, some Muslims may believe that there is no need to worship in a mosque. ...read more.