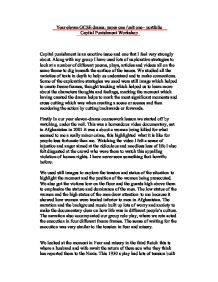 Year eleven GCSE drama: paper one /unit one- portfolio Capital Punishment Workshop [image001.gif] [image002.gif] Capital punishment is an emotive issue and one that I feel very strongly about. Along with my group I have used lots of explorative strategies to look at a number of different poems, plays, articles and videos all on the same theme to dig beneath the surface of the issues. We studied all the varieties of texts in depth to help us understand and to make connections. Some of the explorative strategies we used were still image which helped to create freeze frames, thought tracking which helped us to learn more about the characters thoughts and feelings, marking the moment which having created the drama helps to mark the most significant moments and cross cutting which was when creating a scene or scenes and then reordering the action by cutting backwards or forwards. Firstly In our year eleven-drama coursework lesson we started off by watching, under the veil. This was a horrendous video documentary, set in Afghanistan in 2001 it was a about a woman being killed for what seemed to me a really minor crime, this highlighted what it is like for people less fortunate than me. Watching the video I felt a sense of injustice and anger aimed at the ridiculous and needless loss of life I also felt disgusted at the crowd who were there to watch this appalling violation of human rights. I have never seen something that horrific before. We used still images to explore the tension and status of the situation to highlight the moment and the position of the women being prosecuted. We also got the victims low on the floor and the guards high above them to emphasize the stature and dominance of the men. The low status of the women and the high status of the men drew attention to me because it showed how women were treated inferior to men in Afghanistan. ...read more.

Not even you're family Chris: naaa Chris Craig don't need any body Physiatrist: ok so chris what is your relation to this Derek Bentley I am hearing about. Chris: ah he is a nobody and I would never hang round with that scumbag, did u no he has spent half his life in the slammer then he thinks he can get me into his trouble Physiatrist starts writing in her note pad straight away Physiatrist: ok and finally do you have any hopes or plans for the future? Chris : yea I do and I am not scared of going to prison all I ever wanted was to be in a b****y battle and die heroically by taking out as much pigs as I can, that is my dream Physiatrist: pigs? Chris: police inn it Chris gets up and stares steadily out the window Chris: and one day that will happen and people will no me around hear as the saviour yea the saviour got a nice ring to it don't you think. Physiatrist looks shocked Physiatrist: ok..... well that's about all the time we have this week. I will be wanting to see you on a regular basis now is this ok Chris Chris doesn't answer he leaves the room with a s******c smile on his face and walks out laughing I Used Christopher Craig as a very hard to explain character and as shown in the film his ego can sometimes get the better of him. Chris Craig odviosly dosent care about the consequences of capital punishment or maybe he is trying to cover up his true feelings. To keep the script in accordance with time and place, I decided to makethe character of the psychologist a very direct and straight to the point man.This is because a session with a crime psychologist in the 1950s would havebeen more like a police interview. ...read more.

This activity signified to me what peer pressure can do to you and a lot of people that expierance Capital punishment go through peer pressure before committing a crime `Let him have it' was a film about unfair trials. This made me think about capital punishment, if you get wrongly blamed and put to death for a serious crime, but later evidence is found that you are innocent there is no way to bring back the dead. Let him have it also helped us with lots of our drama exercises. It linked in with a task we did, were having created the drama we had to stop at a specific time and say `let him have it'. Our group was at a court and when the plaintiff was found guilty the judge ordered silence, went quiet for a couple of seconds to build up apprehension and with a loud gasp she shouted guilty to the relief of the jury. A group we watched using the same task did a totally different story about three boys playing a computer game at a sleep over and in the middle of the game one of the boys shouted `let him have it' to highlight the victory in the game. Capital punishment is still a big part of many cultures today. After studying through this issue I have many different point and views for and against it capital punishment. I understand how it can effect people physically and mentally, peoples thoughts and views on it, why people commit crimes e.g. peer pressure, why it was banned in Europe and how it ca affect peoples lives. The message is still clear that people want it back in the United Kingdom and also why people don't want it to be brought back. Although it is still not part of Britain I wonder how it would of effect my life if it was here and I wonder would crime be decreased, but neither less it is a very important issue and one that should be analyzed carefully. Colin Finnerty ...read more.